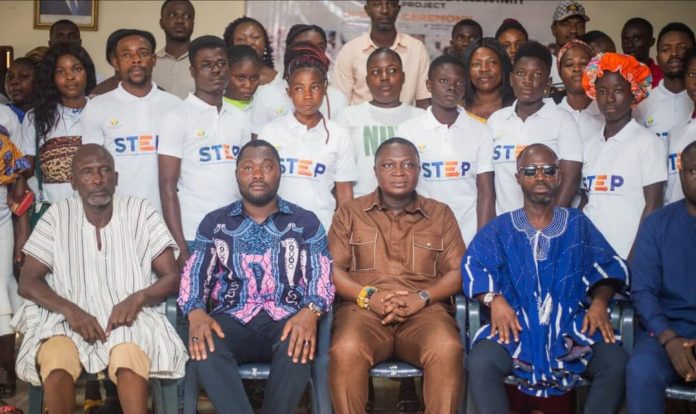 The Joseph Adjei-Banin (JAB), Foundation a benevolence organisation in collaboration with the National Youth Authority (NYA), has supported 20 youth selected from the Assin Fosu Area in apprenticeship training to improve their livelihoods.

They were supported with tools such as sewing machines, hair dryers, cosmetics and many more.
The youth would be taken through dressmaking, cosmetology, digital installation, and hair dressing.

Mr Joseph Adjei-Banin, Chairman of NAB and an aspiring parliamentary candidate for the Assin Central Constituency on the ticket of the New Patriotic Party (NPP), said all expenses have been fully paid, for the beneficiaries to commence their apprenticeship right away.

Their training span between two to three years.
He stressed that the youth should be empowered to be financially stable for them to continue to be agents of change and a force on which every economic activity thrived.

The Chairman, noted that the apprenticeship would provide the youth with skills and working attitude to be productive and competitive to aid the development of the human resource base of the country for national economic and industrial growth.

Mr Adjei-Banin advised the trainees to be consistent and punctual to learn the skills acquisition and avoid excuses for absenteeism pledging his commitment to seeing the project achieved the desired impact.

Mr Nelson Owusu-Ansah, the Deputy Director of NYA said the perception by some Ghanaians that skills acquisition was for the downtrodden, school dropouts and the marginalized, should be erased from the minds of people.

Skills when properly acquired with the right equipment, could afford people the opportunity to work to take care of themselves as well as their families and train others to acquire the necessary skills for the development of the Area.

Mr Nicholas Fiifi Baako, Municipal Chief Executive of Assin Central lauded the efforts of JAB Foundation for their commitment in helping the youth of the area.

He advised the beneficiaries to be focused and learn skills that would eventually make them financially independent to contribute their quota to the development of Assinman and the country at large.