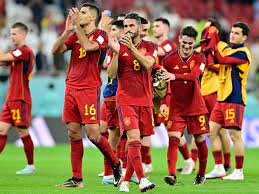 The Red Fury of Spain exhibited superiority and class over Costa Rica to record the highest score line in the ongoing FIFA World Cup on match day one to sit at the summit of Group E log, ahead of Japan who defeated Germany 2-1, and Costa Rica at the bottom.

Forward Dani opened the scoring in the 11th minute after he collected a through pass from inside the box and lifted the ball beyond the reach of the Costa Rica goalie Kylor Navas who was off his line.

Spain was dominating the game from the on set and this yielded results when Asensio found himself unmarked in the opponent’s box and slotted past Navas into the bottom right corner in the 21st minute to double the lead for Luiz Enrique’s side.

Ten minutes later, Torres wasted no time to deliver an excellent penalty kick to cement the lead for the Spaniards who made the Costa Ricans a pale shadow of themselves to end the first half 3-0.

Despite a convincing lead, Spain came from the break looking hungrier to slot in more goals as the first team to unleash a record seven unanswered goals.

Torres, the FC Barcelona forward pounced on a loose ball inside the opponent’s 18-yard box and cleverly beat the goalkeeper with a shot into the bottom left corner to make it 4-0 within the 54th minute and also grab his first brace in the Mundial.

18-year-old Gavi showed his fantastic ability as he volleyed the ball inside Costa Rica’s goal post with a superb assist from Alvaro Morata before Carlos Soler capitalised on a rebound to fire inside the right post in the 90th minute before Morata’s last minute sensational shot into the back of the net from the edge to wrap up proceedings for the Spain national team.

Spain will slug it out with Germany, whilst Costa Rica take on Japan in the second round of matches on Sunday, November 27.

GNA’s World Cup coverage is sponsored by the Ministry of Youth and Sports and Betway Ghana.