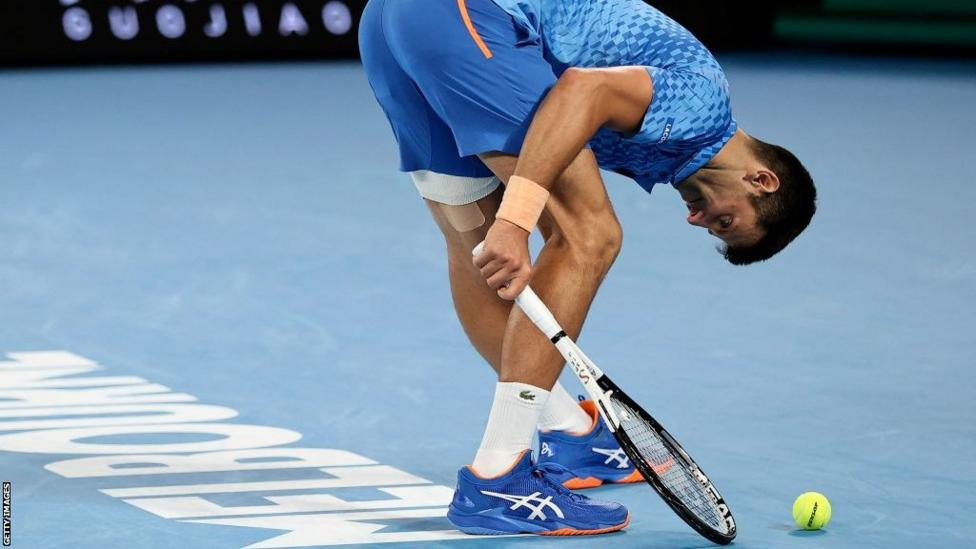 Australian Open semi-finalist Victoria Azarenka says she feels sympathy for Novak Djokovic and pleaded for players not to be treated as “villains”.

Belarus’ Azarenka, 33, is in her first Melbourne semi-final since 2013 – when the legitimacy of her medical time-out against Sloane Stephens was questioned.

Serbia’s Djokovic has been accused of dramatising the extent of a hamstring injury during the Australian Open.

“We are regular human beings that go through many, many things,” she said.

“There is sometimes, I don’t know, an incredible desire for a villain and a hero story that has to be written.

Nine-time men’s champion Djokovic, who plays Russian fifth seed Andrey Rublev in the men’s singles quarter-finals on Wednesday at 08:30 GMT, said earlier this week he was an “easy target to be the villain”.

Djokovic was reportedly unhappy the validity of his toilet break during a second-round win over France’s Enzo Couacaud was questioned.

The fourth seed has been wearing heavy strapping on his left thigh all tournament, taking a medical time-out against Couacaud and also during his third-round win over Grigor Dimitrov.

Following his fourth-round win over Australia’s Alex de Minaur, Djokovic was also reported to have told Serbian media that only his injuries “were doubted”.

“I leave the doubting to those people – let them doubt,” he added.

“Only my injuries are questioned. When some other players are injured, then they are the victims, but when it is me, I am faking it.”

Amid the discussion about Djokovic’s physical state, American world number nine Taylor Fritz said the majority of players are always a “little banged-up”.

“I don’t think people fake injuries, I do think sometimes players stretch the severity of the injury because it depressurises them and helps them play better,” he added.

My opinion that probably nobody cares about…. 80% of players are always dealing w something (severity levels differ) but everyone is honesty always a little banged up… the media is only ever focusing on the top guys so there issues get more attention 🤷🏻‍♂️ https://t.co/SioIxUOZ0e

Accusations taken Azarenka ’10 years to get over’

Azarenka’s victory over Stephens in the 2013 semi-final proved controversial after she took a long medical time-out at a crucial juncture in the match.

After failing to serve out victory, the Belarusian had a 10-minute break and returned to break in the next game to secure her spot in the final.

“It was one of the worst things that I’ve ever gone through in my professional career, the way I was treated after that moment,” she said.

“The way I had to explain myself until 10:30pm because people didn’t want to believe me.

“I actually can resonate what Novak said the other day.”

Ten years on, Azarenka says she is “finally over” how she felt she was treated.

“I’ve been called that I’m cheating, that I’m faking, that I was trying to throw people off their game. It’s everything that is so wrong about my character if somebody actually knows me,” she said.

“At some points I’ve heard that, ‘she has this thing that is bad or this thing is bad’. At some point you’re like: ‘Really? Am I?’ Those doubts starts to creep in.

“Now I just don’t care. I am more and more confident in what I know about myself, and I’m at peace with that. Those comments, judgments, they’re there. I notice them. But I don’t care.”

In the women’s draw, the second semi-final will be decided on Wednesday as Karolina Pliskova takes on Magda Linette at 00:00 GMT before fifth seed Aryna Sabalenka faces Donna Vekic.

It will mark a first Grand Slam quarter-final for 30-year-old Pole Linette, while Pliskova – seeded 30th – of the Czech Republic is aiming to reach her first semi-final at Melbourne Park since 2019.

Croatia’s Vekic and Belarusian Sabalenka – the only top 10 seed left in the draw – face off in what is a maiden Australian Open quarter-final appearance for both.

The other men’s quarter-final is between unseeded Americans Ben Shelton and Tommy Paul.

In the doubles events, Britain’s Neal Skupski and American partner Desirae Krawczyk play Indian pair Sania Mirza and Rohan Bopanna in a mixed doubles semi-final, which is due to take place after his men’s doubles quarter-final alongside Wesley Koolhof. The top seeds take on Australian wildcards Rinky Hijikata and Jason Kubler.

In the men’s wheelchair singles quarter-finals, top seed Alfie Hewett plays fellow Briton Gordon Reid at 00:00 before they team up in the wheelchair doubles last eight against Joachim Gerard and Takuya Miki.