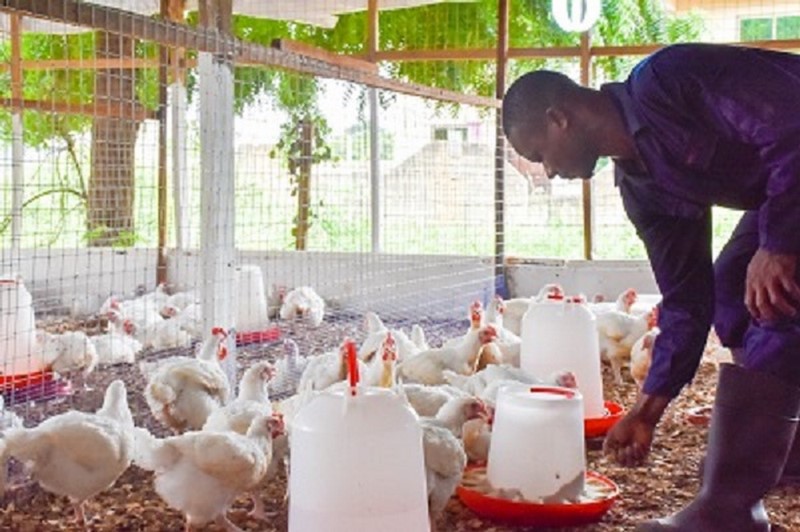 File photo of a poultry farmer

The Greater Accra Poultry Farmers Association is optimistic that the compensation to be given to farmers who lost their birds to the Highly Pathogenic Avian Influenza disease will help cushion them against the impact.

Poultry farmers in Ghana have indicated that the industry is likely to record its severest shock in years following an outbreak of the H5N1 avian virus also known as bird flu.

The disease has come at a time when poultry farmers are battling with the high cost of feed due to shortage on the market.

Per the latest briefing on Monday, July 19, 2021, the Veterinary Services Directorate of the Ministry of Food and Agriculture indicated that close to 10,000 birds had been destroyed across seven poultry farms where the influenza was detected.

President of the Greater Accra Poultry Farmers Association, Michael Nyarko-Ampem, urged poultry farmers across the country to corporate with the Ministry of Food and Agriculture to control and eradicate the bird flu disease.

“There is compensation that is given to farmers who suffer such calamities. But, we haven’t been informed yet about the modalities, but that has been the norm. Generally, that is what we are going to push. Anybody who has been affected must be given compensation because if that is not done, people will go underground to do all sorts of things, so we will ensure that it is done,” he told Accra-based Citi FM.

The Ministry of Food and Agriculture has confirmed the outbreak of the Highly Pathogenic Avian Influenza disease, also known as Bird Flu, in parts of the country.

The Ministry said its Veterinary Services Directorate detected the Flu in the Greater Accra, Central, and Volta Regions.

Fears over the possible collapse of poultry businesses

Already, farmers have expressed fears that the outbreak of the Bird Flu will have a negative impact on their businesses and could collapse their farms.

According to them, the COVID-19 pandemic severely affected their businesses and the outbreak of the infectious disease presents a precarious situation.

“It is a double blow because we are reeling under the unavailability of maize and other resources for production, and then this [outbreak] comes in. It is a big blow, and it is really going to affect the way we do things because the government said importation of day-old chicks from neighbouring countries that have been affected has been banned, so it is going to affect the already precarious situation and make it worse. It is a not pleasant time for poultry farmers,” Michael Nyarko Ampem said.

While urging the public to report any unusual death of domestic poultry and wild birds to the authorities, Mr Ampem requested of the government, a quick solution to the shortage of poultry feed.