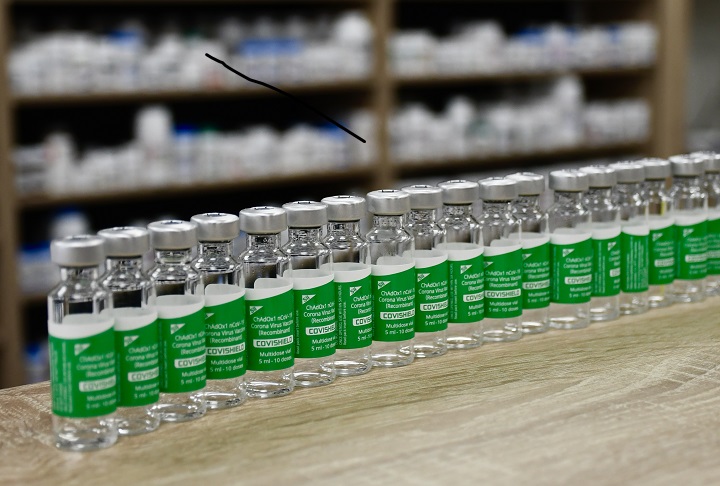 Canada will have received 6.4 million AstraZeneca COVID-19 vaccines by the end of June, a government official says.

The government official told Global News said there is some uncertainty that all of those doses will in fact be delivered.

For the current quarter ending on June 30, the official said Canada can expect to see 1.6 million AstraZeneca doses through the U.N.-backed initiative known as the COVAX facility. Those doses are manufactured in South Korea and ‘finished’ in a European location. Another 1 million doses will come from AstraZeneca manufacturing facilities in the U.S.

Read more: ‘Demand is outstripping the supply’: Is Canada running out of AstraZeneca COVID-19 vaccines?

The figure also takes into account 2.3 million doses of the vaccine that arrived in Canada between January and March, 300,000 of which came from the COVAX facility in the second quarter.

Canada was supposed to receive another 1.5 million AstraZeneca doses made by The Serum Institute in India, but government officials say Canada will not be “pushing” for those Serum Institute exports as India’s COVID-19 crisis deepens.

India is bracing for some “horrible” weeks as COVID-19 infections and deaths continue to climb at alarming record-speed. According to the latest data from Johns Hopkins University, India’s confirmed cases shot past 20.2 million on Tuesday, while the number of deaths stood at 222,408.

Strain is mounting on the Serum Institute, which in addition to being India’s main supplier is also a critical COVAX supplier, which more than 90 countries are depending on, and supplies Canada with its CoviShield vaccines. The institute paused exports in March in a bid to help India’s government ramp up its vaccine campaign by opening vaccinations to all adults in the country.

2:00 No timeline for next AstraZeneca shipment to Alberta

No timeline for next AstraZeneca shipment to Alberta

Serum has indicated it may be able to resume exports in June. But in the meantime, Public Services and Procurement Minister Anita Anand said she is pushing AstraZeneca to accelerate deliveries from the U.S. to Canada.

The AstraZeneca vaccine has been cleared by the National Advisory Committee on Immunization for Canadians aged 30 and up, but experts say demand for the shot is outstripping the supply.

— With files from Global News’ David Akin, the Canadian Press and the Associated Press