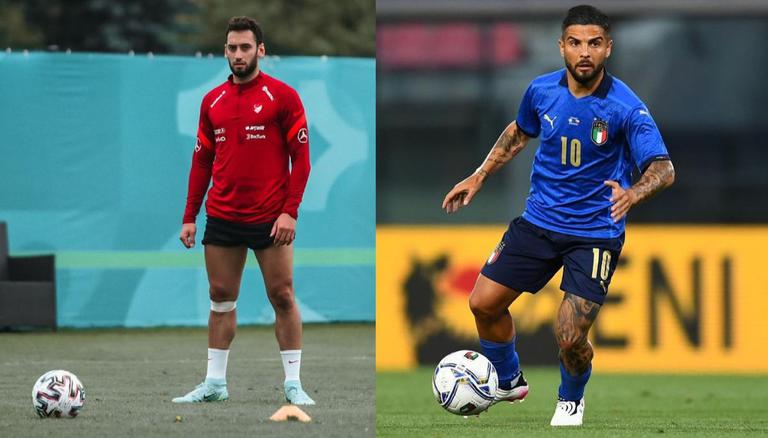 UEFA EURO 2020 kicks off in Rome as Italy – one of 11 host countries – take on Turkey in the opening round of Group A games.

Quarter-finalists or better in each of their last three EURO appearances, Italy have never lost to Turkey in 10 previous matches (W7 D3) and have suffered only one defeat in their eight opening matches at a EURO final tournament since 1980 (W3 D4) – 3-0 against the Netherlands in 2008.

Turkey have qualified for four previous EURO final tournaments and reached the knockout stages twice – although they have lost their opening fixture in all four previous final appearances, and have managed only one Matchday 1 goal, against Italy in 2000.

This is the teams’ second meeting in a EURO final tournament. Dino Zoff’s Italy were 2-1 winners in their opening fixture at UEFA EURO 2000, thanks to goals from Antonio Conte – a spectacular overhead kick – and Filippo Inzaghi, a penalty; Okan Buruk was on target for a Turkey team coached by Mustafa Denizli. Both sides progressed from the section, Italy going on to lose the final to France while Turkey were beaten by Portugal in the quarter-finals.

The sides’ only other EURO fixtures came in qualifying for the 1964 event, Italy winning 6-0 at home – Alberto Orlando scoring four times, his only international goals, and Gianni Rivera twice – and 1-0 away.

Italy kept clean sheets in each of their first five fixtures against Turkey, but have conceded one goal in each of the last five.

The teams’ two most recent games have both been 1-1 friendly draws on Italian soil, in Pescara in November 2002 – when Turkey were coached by current boss Senol Günes – and Bergamo four years later, when Antonio Di Natale’s 39th-minute opener was cancelled out by a Marco Materazzi own goal three minutes later.

Turkey coach Senol Günes was the goalkeeper of the Turkey team beaten 1-0 by Italy in a Florence friendly on 23 September 1978; none of Italy boss Roberto Mancini’s 36 international appearances were against Turkey.

This is Turkey’s fifth appearance at a UEFA European Championship, having made their finals debut in 1996. They reached the quarter-finals of UEFA EURO 2000 and the last four of UEFA EURO 2008 but failed to qualify for the 2004 and 2012 tournaments.

Four years ago, Fatih Terim’s team finished third in their section behind Croatia and Spain, missing out on a place in the round of 16 despite concluding their group campaign with a 2-0 defeat of the Czech Republic. That proved insufficient for a place in the knockout stages after defeats by both Croatia (0-1) and Spain (0-3) – the latter equalling Turkey’s biggest defeat in a EURO finals.

That 2008 semi-final against Germany in Basel, Switzerland – which Turkey lost 3-2 – matched their greatest international achievement. A side coached, as now, by Senol Günes received bronze medals at the 2002 FIFA World Cup after defeating co-hosts South Korea in the third-place play-off.

Turkey qualified for UEFA EURO 2020 by finishing second in Group H behind world champions France, picking up 23 points from their ten matches. Four of those points came against Les Bleus (2-0 h, 1-1 a), with France’s goal in the latter encounter the only one Turkey conceded in their last six qualifiers.

Senol Günes’s side conceded only three goals in qualifying, the joint best defensive record alongside Belgium. They kept eight clean sheets – more than any other team.

This is Turkey’s second match in Rome; they qualified for the 1954 World Cup with a 2-2 play-off draw against Spain at the Olimpico on 17 March that year, going through after the drawing of lots.

This is Italy’s tenth EURO final tournament and their seventh in a row since sitting out the 1992 edition in Sweden. Only twice have they failed to advance through the group stage – in 1996 and 2004.

Italy got as far as the quarter-finals at UEFA EURO 2016, finishing first in their group and beating holders Spain 2-0 in the last 16 only to lose to Germany in the last eight, going down 6-5 on penalties after a 1-1 draw.

Italy triumphed on home soil at the 1968 UEFA European Championship and have been runners-up twice since – in 2000 and 2012.

This time round, Roberto Mancini’s side won all ten of their qualifiers to finish first in Group J, swelling the number of countries to have reached the finals with a perfect record to eight, Belgium also having achieved the feat in the UEFA EURO 2020 preliminaries. Of the previous six to have won every qualifier, however, only Spain (2012) went on to win the tournament itself.

A 3-0 win away to Bosnia and Herzegovina in their penultimate qualifier was Italy’s tenth successive win in all internationals, the first time in their history they had achieved that feat.

The Azzurri made it 11 straight victories with a 9-1 home win against Armenia in their final qualifying game, the first time they had scored nine goals in a game since August 1948. Seven different players were on the scoresheet, a new national record.

Italy’s record in Rome is W35 D18 L6, with three of those defeats coming in their last six matches at the Olimpico. Those are the Azzurri’s only losses in their last 18 matches in Rome (W13 D2); most recently, they beat Greece 2-0 there in UEFA EURO 2020 qualifying on 12 October 2019. They are undefeated in the Italian capital in EURO and FIFA World Cup matches; at final tournaments Italy’s record in Rome is W8 D2.

Mancini was Galatasaray coach between September 2013 and June 2014, winning the Turkish Cup in his sole season in charge. Burak Yilmaz was the Istanbul club’s top scorer that season.

Çaglar Söyüncü (Leicester) and Jorginho (Chelsea) faced each other in the FA Cup final on 15 May, Leicester winning 1-0.

Turkey played three warm-up games prior to UEFA EURO 2020, extending their unbeaten run to six matches by beating Azerbaijan 2-1 in Alanya, drawing 0-0 with Guinea in Antalya and prevailing 2-0 against Moldova in the German town of Paderborn.

There were international debuts in those matches for three squad members – Altay Bayindar, Ridvan Yilmaz and Halil Dervisoglu, who marked his with a goal 34 minutes into the game against Azerbaijan.

There are just three survivors in the Turkey squad from UEFA EURO 2016 – Hakan Çalhanoglu, Ozan Tufan and Burak Yilmaz. Ozan and Burak were the team’s only scorers in France, with one goal apiece.

Italy made it eight successive victories – all with clean sheets – as they defeated San Marino 7-0 in Cagliari and the Czech Republic 4-0 in Bologna in their two pre-tournament friendlies. Roberto Mancini’s side are now unbeaten in 27 internationals (W22 D5) since going down 1-0 to Portugal in Lisbon in the UEFA Nations League on 10 September 2018.

Matteo Pessina, a late addition to Italy’s squad following the withdrawal of injured Stefano Sensi, scored his first two international goals in the win against San Marino, and current Under-21 international Giacaomo Raspadori made his senior debut as a substitute against the Czech Republic.

Gaetano Castrovilli, who won the second of his two caps against San Marino, 18 months after his debut, has replaced the injured Lorenzo Pellegrini in the squad.

Among the seven Italy players selected for both UEFA EURO 2016 and this tournament are skipper Giorgio Chiellini, who is appearing in his fourth successive EURO final tournament, and Leonardo Bonucci and Salvatore Sirigu, who are both involved in their third.

Chiellini and Bonucci are the only members of the Italy squad to have previously scored at a major tournament, the former having found the net against both Brazil at the 2013 FIFA Confederations Cup and Spain at UEFA EURO 2016, while the latter was the Azzurri’s scorer from the penalty spot in the 2016 quarter-final against Germany.

Senol Günes, Turkey coach: “The result we get in the first match is important; a draw or a win can cause confusion in the group. I hope so. I want to see our strength in the first match; even if we lose, it’s important to play well. I hope it’s going to be a great game, an enjoyable game … and that we win!”

Roberto Mancini, Italy coach: “We must respect Turkey, they are a side full of talent. The opener is always difficult, and there will be plenty of emotions but you can’t get too carried away. I don’t think there is an excess of enthusiasm: The fans can have that; we know who we are up against. The desire to be protagonists at this EURO is huge but this is a match to be played with lightheartedness. We can do it!”