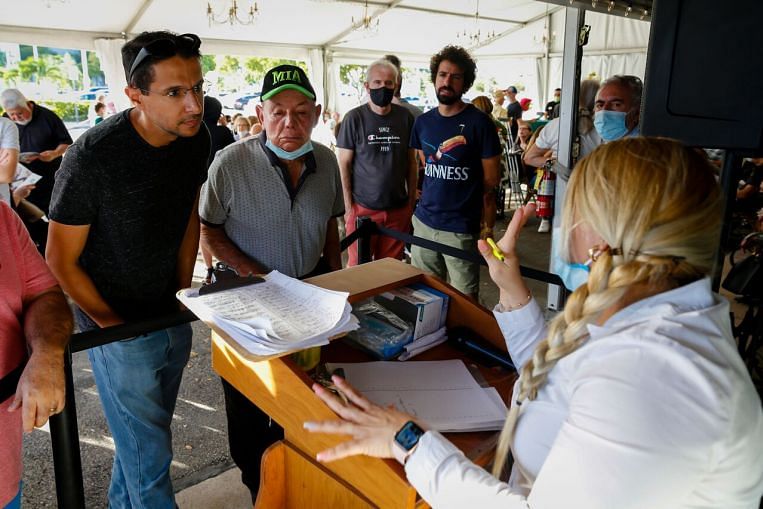 MIAMI (REUTERS) – Florida on Thursday (Nov 18) banned schools and businesses from requiring vaccination against Covid-19 and set the stage for a possible withdrawal from the federal agency aimed at protecting workplace safety.

Governor Ron DeSantis, a right-wing Republican widely believed to be planning a run for the US presidency, signed the new laws in a community called Brandon, the same name used as a euphemism for a coarse epithet in a chant against Democratic President Joe Biden.

In a later announcement of the Bills’ signing on Twitter, Mr DeSantis referred to “the free state of Florida.”

Echoing anti-vaccine rhetoric, Mr DeSantis repeated a misleading claim that vaccines do not protect against coronavirus infections, and said “natural immunities” should qualify people to return to in-person work.

The Bills were passed in a three-day special session of the Republican-dominated Florida legislature called by Mr DeSantis with the goal of thwarting coronavirus vaccine mandates imposed by the federal government as well as by private employers and school districts.

The laws allow employers to ask employees to become vaccinated, but also require them to allow people to opt out for religious, health and other reasons.

People who previously had Covid-19 would be exempt despite evidence the vaccines provide greater protection against reinfection as well as serious cases that require hospitalisation.

Employers who refuse to allow the exemptions can be fined up to US$50,000 (S$67,865) per violation. The new laws also ban government entities from requiring vaccinations. Schools districts may not require vaccinations or ask teachers and students to wear masks.

The laws also ban school districts from requiring otherwise healthy students who have been exposed to Covid-19 to quarantine before returning to class.

The legislature also directed the governor’s office to develop a plan to set up the state’s own agency for the protection of workers, which would replace the authority of the federal Occupational Safety and Health Administration.

Florida is among several conservative states suing the federal agency to stop it from enforcing the Biden administration’s vaccine mandate.

About 61,000 people have died from Covid-19 in Florida, the third-most-populous US state, although new cases have decreased dramatically there in recent weeks as the summer surge ebbed.