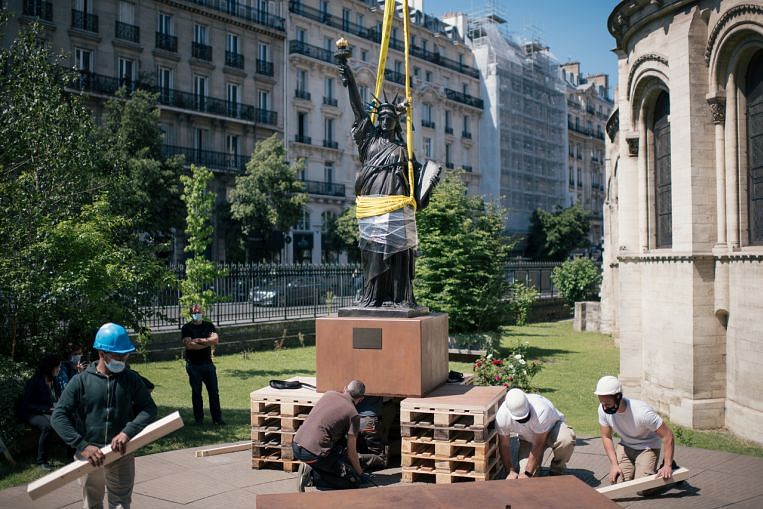 PARIS (NYTIMES) – A replica of the Statue of Liberty began a journey this week from Paris to New York, officials in France said, sending the United States another, much smaller monument to freedom and symbol of French-American friendship.

At under 3m tall, a 16th of her bigger sister’s size, the bronze statue was carefully hoisted from its place at a museum of inventions in Paris during a ceremony on Monday (June 7), according to a news release from the National Conservatory of Arts and Crafts.

The statue, which weighs nearly 454kg, had been on display at the museum, Musee des Arts et Metiers, for 10 years and will be placed in a specially designed Plexiglas box for its nine-day voyage across the Atlantic.

The smaller statue, based on the original 1878 plaster model by sculptor Frederic-Auguste Bartholdi, was installed just outside the museum’s entrance in 2011. This statue was cast using a 3D scan of another model in Paris, the news release said.

It will be exhibited on Ellis Island from July 1-5, facing its much bigger sibling on Liberty Island. Then, it will be moved to the French ambassador’s residence in Washington, where it will be on display from July 14, France’s Bastille Day, until 2031.

There are more than 100 replicas of the Statue of Liberty around the world, according to the conservatory. More than 30 are in France, including a handful in Paris.

The statue’s arrival in New York, the conservatory said, is meant to celebrate and underscore the central value of Franco-American friendship: liberty.

“This statue symbolises the virtues of freedom and integration,” said Mr Olivier Faron, administrateur-general of the National Conservatory of Arts and Crafts. “These two values forever unite France and the United States.”

The conservatory also said the gesture was intended to pay tribute to those who had fought for freedom and democracy on both sides of the Atlantic.

The US Embassy in France shared a video on Twitter this week of a crane lifting the statue into the air as workers below carefully held on to it with straps.

At a ceremony marking the occasion, Mr Liam Wasley, an acting deputy at the embassy, said: “This Atlantic crossing renews and strengthens our shared attachment to what we believe in, the foundations of our relationship.”