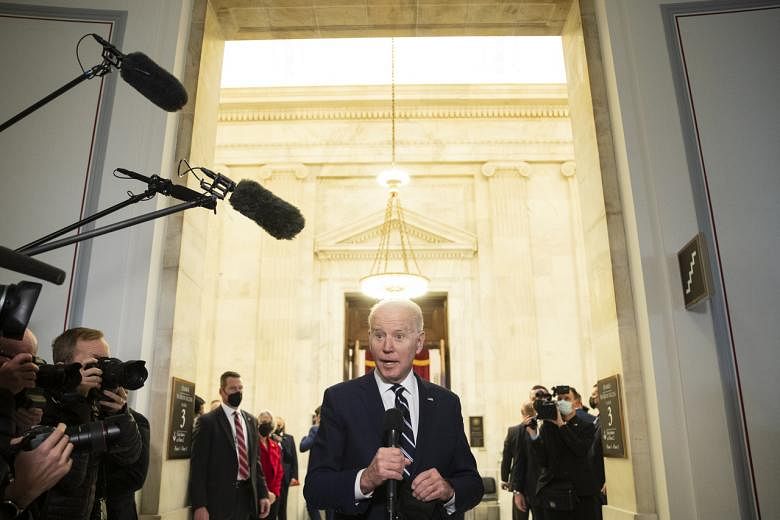 WASHINGTON (NYTIMES) – With the White House legislative agenda in shambles less than a year before the midterm elections, Democrats are sounding alarms that their party could face even deeper losses than anticipated without a major shift in strategy led by the President.

The frustrations span the spectrum from those of the party’s liberal wing, which feels deflated by the failure to enact a bold agenda, to the concerns of moderates, who are worried about losing suburban swing voters and had believed Democratic victories would usher a return to normalcy after last year’s upheaval.

Democrats already anticipated a difficult midterm climate, given that the party in power historically loses seats during a president’s first term.

But the party’s struggle to act on its biggest legislative priorities has rattled lawmakers and strategists, who fear their candidates will be left combating the perception that Democrats failed to deliver on President Joe Biden’s central campaign promise of rebooting a broken Washington.

“I think millions of Americans have become very demoralised – they’re asking, what do the Democrats stand for?” said Senator Bernie Sanders, the Vermont independent in charge of the Senate Budget Committee.

In a lengthy interview, he added, “Clearly, the current strategy is failing, and we need a major course correction.”

Representative Tim Ryan, a Democrat from a blue-collar Ohio district who is running for the state’s open Senate seat, said his party is not addressing voter anxieties about school closures, the pandemic and economic security.

He faulted the Biden administration, not just for failing to pass its domestic agenda but also for a lack of clear public health guidance around issues such as masking and testing.

“It seems like the Democrats can’t get out of their own way,” he said. “The Democrats have got to do a better job of being clear on what they’re trying to do.”

The complaints capped one of the worst weeks of the Biden presidency, with the White House facing the looming failure of voting rights legislation, the defeat of their vaccine-or-testing mandate for large employers at the Supreme Court, inflation rising to a 40-year high and friction with Russia over aggression toward Ukraine.

“I’m sure they’re frustrated – I am,” said Senator Dick Durbin of Illinois, the No. 2 Senate Democrat, when asked this week about the chamber’s inability to act on Mr Biden’s agenda. Discussing the impact on voters before the midterm elections, he added, “It depends on who they blame for it.”

The end of the week provided another painful marker for Democrats: Friday (Jan 14) was the first time since July that millions of United States families with children did not receive a monthly child benefit, a payment established as part of the US$1.9 trillion pandemic relief plan that Democrats muscled through in March without any Republican support.

Plans to extend the expiration date for the payments, which helped keep millions of children out of poverty, were stymied with the collapse of negotiations over the sprawling domestic policy plan. And additional pandemic-related provisions will expire before the end of the year without congressional action.

“That’s just about as straightforward as it gets,” said Mr Ryan. “If the Democrats can’t get on with a tax cut for working families, what are we for?”

In recent days, Mr Biden has faced a wave of rising anger from traditional party supporters. Members of some civil rights groups boycotted his voting rights speech in Atlanta to express their disappointment with his push on the issue, while others, including Ms Stacey Abrams, who is running for governor in Georgia, were noticeably absent.

Mr Biden vowed to make a new forceful push for voting right protections, only to see it fizzle the next day.

And last week, six of Mr Biden’s former public health advisers went public with their criticisms of his handling of the pandemic, calling on the White House to adopt a strategy geared to the “new normal” of living with the virus indefinitely. Others have called for the firing of Mr Jeffrey Zients, who leads the White House pandemic response team.

White House officials and Democrats insist that their agenda is far from dead and that discussions continue with key lawmakers to pass the bulk of Mr Biden’s domestic plans. Talks over an omnibus package to keep the government open beyond Feb 18 have quietly resumed, and states are beginning to receive funds from the US$1 trillion infrastructure law.

“I guess the truth is an agenda doesn’t wrap up in one year,” said White House press secretary Jen Psaki.

While there is widespread agreement around the electoral peril that the party faces, there’s little consensus over who, exactly, is to blame.

Liberals have been particularly scathing in their critique of two centrist senators, Mr Joe Manchin of West Virginia and Ms Kyrsten Sinema of Arizona, and their long-standing objections to undermining the Senate filibuster, as well as Mr Manchin’s decision to abruptly reject the US$2.2 trillion spending plan last month.

For months, Democratic lawmakers, activists and officials have been raising concerns about sinking support among crucial segments of the party’s coalition – black, female, young and Latino voters – ratings many worry could drop further without action on issues like voting rights, climate change, abortion rights and paid family leave.

“In my view, we are not going to win the elections in 2022 unless our base is energised and ordinary people understand what we are fighting for, and how we are different than the Republicans,” Mr Sanders said. “That’s not the case now.”