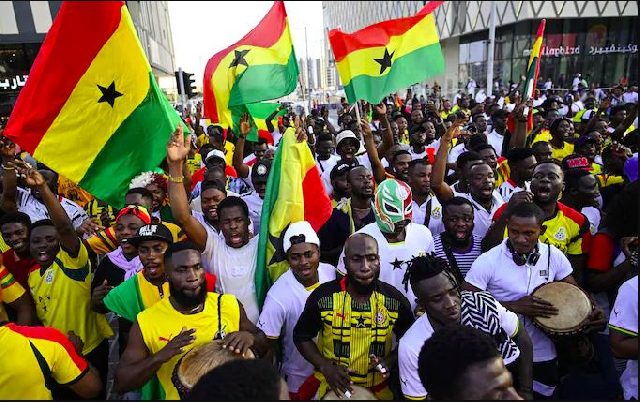 Most Ghanaians are very confident that the Black Stars will surprise Christiano Ronaldo and Portugal at the 2022 FIFA World Cup in Qatar.

After the Ghana national team had defeated European side Switzerland, many people who did not believe in the call-up by coach Oto Addo are now supporting, and hoping and praying that Ghana does well to top the Group H and move on to the next stage.

Majority of Ghanaians including the President, Vice President, former Presidents have all expressed confidence in the Black Stars as they wish them well.

Looking at the Black Stars camp by the power of the internet and social media; Facebook, Twitter, Instagram and TicTok, one can see the training and confidence in camp as peaceful and perfect.

Many people who spoke to this paper in an interview said the Ghana Football Association (GFA) led by Mr. Kurt Okraku should be commended for their splendid work in managing the team, as well as attracting sponsors.

The world cup has already produced some shocking results, like Saudi Arabia beating Argentina, and the Ghana Black Stars have been inspired by the Arabians that everything is possible.

“If Messi is down, then C. Ro can also go down” said Erico, a friend of mine who trains with me every morning at the gym. It may look herculean, but Ghana can beat Portugal. Coach Otto Addo and his technical staff has what it takes, the playing body also knows what is at stake at the biggest football festival,” a supporter said.

The Ghana Supporters Union led by One Man aka Abraham Boakye and Abraham Nkansah popularly known as Apirigu Chakapama have also arrived in Qatar to give the team all the massive and maximum support.

Other groups like We Need Peace Group in Doha Qatar in collaboration with the Chief Executive Officer (CEO) and Founder of African Youth Peace Campina and Chairman of We Need Peace Group, Edward Osagyefo are also rallying massive support for the Black Stars all in anticipation of victory in their match against Portugal and subsequent matches.
World Cup 2014

In 2014, things did not go well for Ghana as the players were not told the truth by the authorities, but this time everything is transparent and the players are in high spirits and good to go.

After 2006, 2010 and 2014, the GFA and the Black Stars should gather the experience to face any opposition, whether Portugal, South Korea or Uruguay.

The President of the Republic, Nana Addo Dankwa Akufo-Addo, assured the twenty-six-man Black Stars contingent and the entire technical team of the nation’s unalloyed support ahead of the 2022 World Cup.

According to the President, the Black Stars, who will be featuring and representing the nation at the Mundial in far-away Qatar “should know and feel that the entire nation, without the distinction of politics, religion, ethnicity; the entire Ghanaian nation are 100% solidly behind them.

Dr Mahamudu Bawumia has sent social media users into a frenzy as he exhibited sublime football skills.
In the visuals, the second gentleman of the land, Dr Bawumia encouraged the players to give their all in order to win the ultimate prize. The Black Stars of Ghana, who will be making their fourth appearance at the FIFA World Cup, are housed in Group H alongside Portugal, Uruguay and South Korea Follow Sports Brief on Twitter for more trending and breaking news!

The West African nation are making a return to the Mundial after missing out on the last edition which was held in Russia four years ago and will face Cristiano Ronaldo’s Portugal. Ahead of their game against the Europeans, Dr Bawumia has urged the Black Stars to give their all without fear.

In a statement copied to the Ghana News Agency, Mr Mahama said: “Once again, our nation has summoned 26 gallant men to lift the flag of Ghana high at the world cup in Qatar.”

“These 26 men represent the hopes of an expectant nation for success on the global stage.”
“They have toiled through qualification and secured us the right to be counted among the best 32 footballing nations on earth.”

That, in itself, was significant and worth celebrating, he said.
“Now the time has come to stake a claim to the world cup trophy itself and I believe our Black Stars have what it takes to go all the way.”