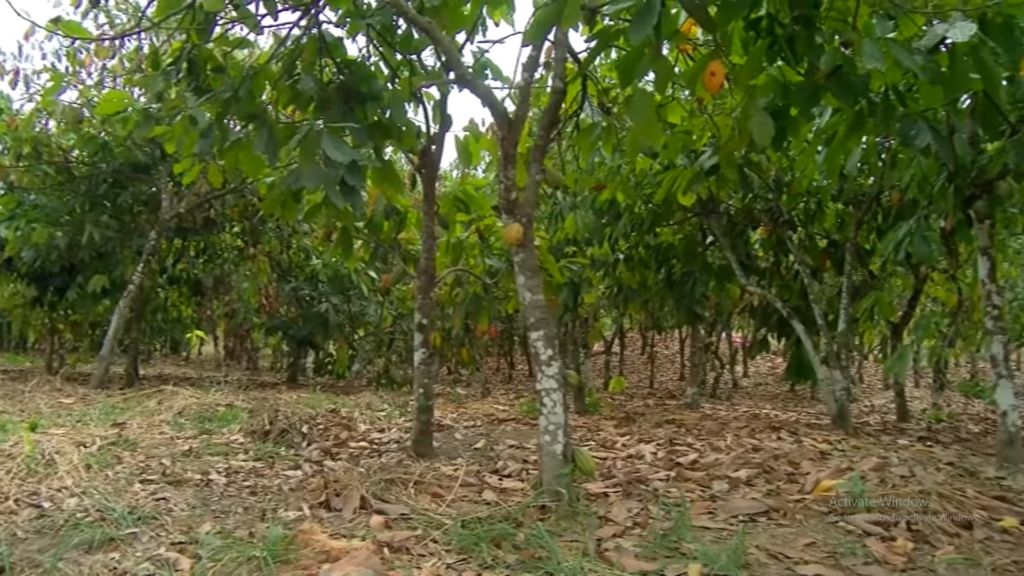 The Ghanaian economy’s cash cow is cocoa, which ranks second in terms of foreign exchange earnings.

But the cocoa business is reeling under the threat of climate change.

The nation has been pursuing climate-smart cocoa production techniques, such as planting shade trees on cocoa farms, to assist sustainable production.

However, the recent occurrence of illegal mining activities, whereby miners destroy planted trees, farms, and water for irrigation, has hampered these efforts.

The effects of irresponsible mining on the cocoa industry and the cost associated with the fight against climate change are examined by Kofi Adu Domfeh.

Farming Cocoa
Meet Fatima Osman, a 43-year-old farmer at Pakyi No.1 in the Amansie West District of Ashanti region.

In the past 19 years, Fatima has supported her husband to farm cocoa and other root and tuber crops like cassava, yam and plantain on their three-acre farm.

“This is what we do to cater for ourselves and four children,” she says. “Farming has been beneficial to us in these years. We are able to take our children to school, take them to hospital when sick and save something small with the rural bank”.

But recent developments on their farmland has got her worried.

Her only source of water for irrigation was the Akai Stream which has been destroyed through illegal mining.

The water body is all muddy and milky, not fit to be used to irrigate crops.

“The miners use the water to wash their gold,” said Fatima. “Now, we only pray for the rains to cater for our crops”.

A bigger threat however stares the farmers in the face. These illegal miners are gradually invading their cocoa plantation.

“They first came with an offer to compensate me to take over the farm but I refused,” Fatima’s husband, 56-year-old Bawa Osman, narrated. “Now, other farms are being invaded. We look helpless”.

Like most farmers in the community, Fatima and her husband are not natives and therefore own no lands.

They have no say when the farmlands are being taken from them for other purposes.

Traditional authorities have been blamed for selling out farmlands to illegal miners.

Experts warn of dire socio-economic and climate change consequences if cocoa farms continue to be excavated for gold.

The prized bean under threat
More than half of the chocolate consumed worldwide is produced on cocoa plantations in Ghana and Côte d’Ivoire, where tens of thousands of smallholder farmers supply lucrative fair-trade markets in industrialized nations.

Ghana produces one million metric tons of cocoa on average per harvest year when the weather is favorable and farming techniques have been improved. However, when the soil is insufficiently fertile to support plant development, production falls off.

Major obstacles to sustainability include nutrient loss and sunburn. Temperatures are high due to climate change, and the cocoa plants struggle because of the heat and the dearth of nutrients in the soil.

A steady increase in temperature, an extension of the dry season, and a decrease in annual rainfall are being seen over the bulk of Ghana’s natural zones.

Climate scientists at the Colombia-based International Centre for Tropical Agriculture, CIAT, https://ccafs.cgiar.org/news/chocolate-production-melting-away-climate-change have long predicted that the expected increasing temperatures will lead to massive declines in cocoa production in Ghana and other cocoa-growing areas in West Africa by 2030.

Warmer conditions mean the heat-sensitive cocoa trees will struggle to get enough water during the growing season, curtailing the development of cocoa pods, containing the prized cocoa bean.

Farmers like Fatima and Bawa have been encouraged by government policy to include trees in their cocoa production.

The Forestry Commission and the Ghana Cocoa Board (COCOBOD) assist by supplying the farmers with tree seedlings to encourage afforestation for improved productivity.

“We ask the farmers to combine the cocoa trees with timber trees, high yielding economic trees. Once you have the timber trees on the farm, they will be providing a lot of shade because cocoa is a forest plant and it thrives best when it exists with other trees,” said COCOBOD Chief Executive, Joseph Boahen Aidoo.

Bawa was excited to have received 40 pieces of economic trees, in addition to some plantain suckers to plant in between his cocoa farm since 2014.

His production increased from an average 30 bags per acre to 43 bags of beans in the current harvest.

Affected farmers are not only losing their cocoa plantations, but shade trees received from the government to support their cash crop production.

Traditionally, small scale mining has been part of Ghana’s history but not until 1989 when the government recognized its legitimacy through the Small-scale Mining Act (PNDCL 218), and later integrated in the current Mining Act 703 (2006).

But with the dwindling opportunities in the formal gold mining industry, there has been an upsurge in illegal mining, popularly known as ‘galamsey’ in the parts of Ghana.

In this operation, the miners have no license and no concession. They however invade forests, farmlands and water bodies with heavy mining equipment to exploit for gold ore with no regard to environmental protection.

Researchhttps://www.researchgate.net/publication/360069300_Assessing_the_Impact_of_Illegal_Small-Scale_Mining_Galamsey_on_Cocoa_Farming_and_Farmer_Livelihood_A_Case_Study_in_the_Amansie_West_District_of_Ghana has shown about 12,000 hectares of cocoa land have been traded off for artisanal small-scale mining in the Amansie West District of the Ashanti region between 2010 and 2020.

A visit to the small farming community of Anyinamso reveals a daring act of illegal mining in the path of water bodies.

Illegal miners have taken control of and destroyed the whole river belt of the River Anyinam even as the government fights mining close to water bodies.

In certain cases, illegal miners excavate trenches around their crops, making it impossible to get to the farms.

Sometimes the miners cut off those who wouldn’t sell from their crops, like Boakye Mensah.

“The miners do everything possible to frustrate us and force us to sell out our farms, but we are determined not to give away our farms because it is a legacy for us and the next generation,” he said.

Most farmers who sell their cocoa lands to the miners are impoverished over time.

“We are appealing to the government to help control the destruction of cocoa farms by these illegal miners. Every mined area here used to be a cocoa farm that could have served our country well. But they have uprooted them all,” said Boakye.

Dr. Shalom Addo-Danso of the Forestry Research Institute of Ghana (FORIG) has studied the actual impact of shade trees on various aspects of the cocoa system https://www.researchgate.net/publication/358140142_Restoration_of_degraded_forest_reserves_in_Ghana, including soil nutrient, yield, and carbon, with the intention of influencing policy and providing the farmers with proof of the value of growing and protecting trees on their farms.

He claims that illegal mining, a significant environmental problem, and climate change are now posing a double threat to local communities and landscapes.

Rainfall patterns are disturbed when water bodies within forests are destroyed by the illegal miners.

“This, in the long-term, affects cocoa production because cocoa cannot withstand drought. Therefore yields will be affected, trees will die and incomes of the farmer will diminish,” he said.

The researcher is in favor of giving communities the tools they need to understand how trees affect cocoa fields and the long-term effects of removing them.

A bigger quantity of emissions is exposed by destroying cocoa plantations and the ability for sequestration is lost as a result of climate change, which results in the loss of the cocoa sink – average 70 tonnes of carbon per hectare for a high agro-forestry cocoa system.

According to Dr. Winston Asante, a senior lecturer at the Faculty of Renewable Natural Resources at KNUST, once these forest reserves continue to experience increased illegal mining activities, the climate change implications are observed on two fronts — the removal of carbon and the loss of potentials for emissions combat.

Because they can no longer rely on the rains to farm and it becomes more difficult to get non-timber forest products, the majority of communities that live around forests see a negative impact on agriculture’s contribution to household resilience.

Because most of the forests are unavailable due to unlawful mining, he noted, “their reliance on the forests as an alternative to diversify their household income and food supplies is also compromised.”

Ghana’s REDD+ and COCOBOD’s Dilemma
The Ghana Cocoa Board projects its annual cocoa output to rise to 1.6million tonnes by 2026. But this is threatened by the activities of illegal miners.

Its research has shown that several cocoa farms in the Western, Ashanti and Eastern regions have been lost to illegal mining activities.

Out of the over 20,000-acre cocoa farms, more than 19,000 acres have been devastated by galamsey, representing 80 percent of the selected cocoa farms destroyed between 2019 and 2020 https://www.researchgate.net/publication/299334539_Impacts_of_Mining_Activities_on_the_Environment_Cocoa_Production_and_Livelihoods_of_Cocoa_Farmers_in_the_Prestea-Huni_Valley_District.

The Ghana Cocoa Forest REDD+ Programme https://www.forestcarbonpartnership.org/system/files/documents/1b.%20Ghana%20overview.pdf is the world’s first commodity-based programme to reduce emissions. The Programme aims to improve smallholder farmers’ livelihoods through considerable yield increases and other benefit-sharing arrangements while considerably reducing emissions brought on by deforestation and forest degradation.

But as observed by Dr. Asante, illegal mining in cocoa farms undermines the gains made under the Ghana Cocoa Forest REDD+ interventions.

Ghanaian farmers earn about 80% of household income from cocoa. These farmers are already looking for means to build resilience to improve their livelihoods beyond the climate impacts.

“If we see agroforestry as a good means to pursue cocoa farming, not just for the resilience and sustainability of the cocoa farm, but also because it holds implications for climate mitigation and adaptation for the farm and then for the farmer, then we must begin to see these as a land use that will bring interest and benefit that are competitive,” he said.

Fatima and her husband, for instance, are afraid they may not survive the onslaught of the illegal miners on their farm.

Authorities in the Amansie West District Assembly will not speak on record but say they have been working with the central government’s taskforce to clamp down on illegal mining.

During a recent visit to degraded sites in the Amansie area, however, the Minister of Lands and Natural Resources, said “the fight against illegal mining can be won if it is a collective action”.

Assuring the local assembly of the government’s support, Samuel Abu Jinapor charged the various security councils to step up efforts in dealing with the menace.

“How is it the case that such an operation can be mounted and such level of devastation can happen when there is a district outfit of the Minerals Commission which should have an inspectorate division?” he queried.

As the fight continues, Dr. Winston Asante expects the country’s policy on tree tenure and ownership security to clearly be in the interest of farmers who plant and nurture trees.

“As a country we still haven’t pursued agroforestry at the policy level to the point where the farmer feels confident in the trees he has planted,” he observed. “We still see trees in cocoa farms as timber for exploitation. So these trees are given to contractors and concession holders to come and cut,” he stated.

It has become imperative to urgently remedy the destruction caused by illicit mining to the climate vulnerable cocoa plantations and communities if cocoa is to remain the mainstay of the Ghanaian economy.

This report was completed as part of the Centre for Journalism Innovation and Development‘s 2022 Climate Change Media Fellowship in West Africa with funding support from the Centre for Investigative Journalism’s Open Climate Reporting Initiative (OCRI).