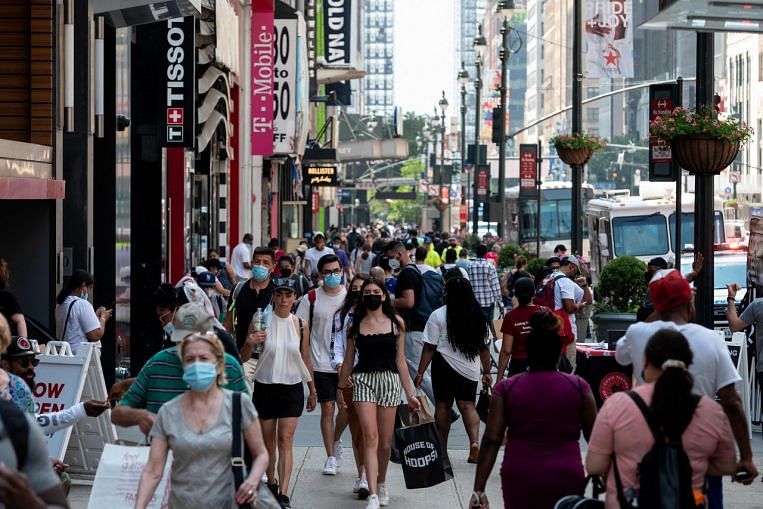 NEW YORK (NYTIMES) – Last year was the year of sourdough baking and jigsaw puzzles – and of trying to work with a toddler screaming in the same room. It was the year of commuting from the bedroom to the living room for those able to work from home, and of harrowing, masked bus rides for many of those who had to go to work in person. It was a year of profound loneliness for those trapped in nursing homes, and of too much togetherness for those quarantining in too-small apartments.

It was a year, in other words, when the pandemic changed life for everyone, but in different ways.

The American Time Use Survey every year asks thousands of people to track every minute of a single day. Most years, the data reflects the ways in which changes in technology, society and the economy subtly shift how we spend our days. For 2020, it reflected the sudden rupture of daily life.

The Labor Department, which oversees the survey, paused data collection in mid-March last year because of the coronavirus outbreak, and didn’t resume it until mid-May. That means the year’s data is missing the most intense period of lockdowns and business closings last year. But it offers a glimpse of how we adapted to a different way of living as the pandemic dragged on, when we were left to figure out how to shop, work, entertain ourselves and connect with others in brand-new and perhaps enduring ways. And it shows how those adaptations and disruptions varied across groups.

Beyond work and school

People last year spent far less waking time – 1 1/2 hours less, on average – with people outside their own household. For people who didn’t live with anyone else, in particular, that meant a lot of time by themselves – more than 20 hours a day either asleep or alone, on average.

Seniors spent the most time alone. But it was young people, especially teenagers, who saw the biggest shift in their social lives. Teenagers 15 to 19 spent six hours a day alone in 2020, up from 4 1/2 in 2019.

With less time out of the house, Americans stared at screens a lot, for Zoom happy hours, Netflix binges or idle social media scrolling.

Parents had a lot to juggle

It’s no secret that the pandemic was particularly disruptive to the lives of people with children. But the time-use data shows just how much child care dominated the lives of parents last year, and how the burden fell unevenly.

With schools closed in much of the country, parents jumped in to help with homework or home-schooling, while spending less time running errands. Overall, parents spent a few minutes more a day on such direct child care duties, with the biggest burden falling on those with kids who would ordinarily have been in elementary school.

Parents spent more time doing just about everything while keeping an eye on the kids in 2020 – more time cooking, more time cleaning and, in particular, more time working. Women spent 48 more minutes a day working while responsible for children in 2020, a figure that understates the true increase for many women because the average includes women who weren’t working at all.

Americans worked less last year, but that was because mass layoffs in the spring meant fewer people were working at all. Among those who kept their jobs, there was little change in the amount of time they worked in a given day – about 7 1/2 hours in 2020, the same as in 2019.

Of course, the nature of work changed drastically. In 2019, 1 in 7 people worked primarily from home on a given day. In 2020, that figure rose to 1 in 3. (The share was almost certainly even higher in the spring, when data wasn’t collected.) Overall, the average time spent at the office or job site fell more than 1 1/2 hours among employed workers, while the amount of time spent working from home rose about the same amount.

The changes weren’t evenly distributed. Hispanic workers were likelier to lose their jobs than members of other racial or ethnic groups, while Black workers were more likely to be in jobs that required them to keep going to work in person. White and Asian workers were far more likely than other groups to be able to work from home.

The educational divide is just as stark. Americans with higher levels of education were both more likely to keep their jobs and more likely to be able to work from home than those with less formal education. People with graduate or professional degrees actually spent more time, on average, working from home last year than working from the office.

Those with a high school diploma or less, meanwhile, saw little increase in their time spent working from home, reflecting the large share of them who were considered “essential workers” and had to show up for work in person in the midst of a pandemic.