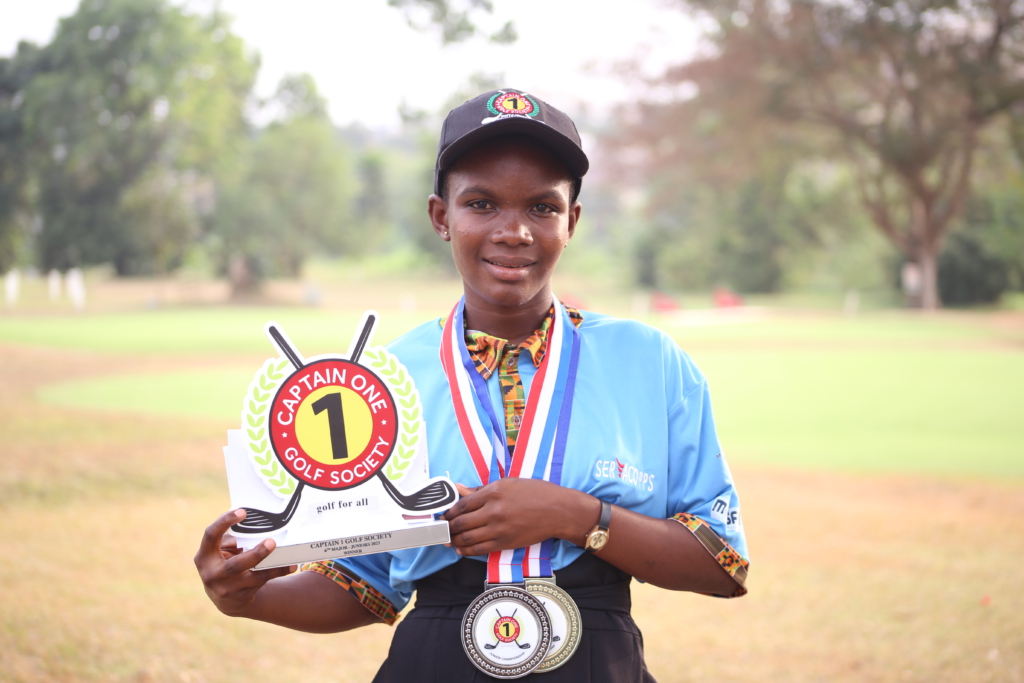 Thirteen-year-old Hudu Zakiya has been adjudged the winner of the 2nd edition of the Captain One Golf Society Golf Junior Championship.

Held in Kumasi, the championship which started on Friday was part of the society’s annual invitational charity championship over the weekend.

The games saw over twenty (20) young female golfers from the Safe-Child Advocacy based in Kumasi and other kids from less privileged backgrounds.

Mary Torhetey and Satura Modesta came second and third respectively with both getting 205 points.

For the Longest Drive, Hudu Zakiya won by 130 points while Satura Modesta had 85 points and Esther Atta had 70 points for the second and third positions respectively.

The Juniors event was also won by Paula Kokame with 140 points.

Hudu Zakiya said, “I am very happy to have won this game. Last year, I couldn’t win anything but I am the overall winner.  Last year, it was difficult for me but this year it was easy. I thank the Captain One Golf Society for all they have done for me and my sisters.”

Mary Torhetey who came second in the putting category last year says she was excited to have improved this year.

“last year I was second in putting but this year I am the first runner-up. I want to say thank you to Captain One Golf Society and how they are supporting us.”

For Modesta, she was appreciative of the contribution from the coaches to teaching them the game of golf and making them better.

Speaking at the closing ceremony, the President of the Captain One Golf Society, Pius Ayeh Appiah commended golfers for showing up for one of the most competitive golf events in the country.

“Most interesting is the fact that an amateur golfer has won the event, equalling the number of times the professionals had won it-three times each,” he stated.

That he said, was the idea behind the events which would provide the platform for all golfers, from professionals, amateur as well as kids to exhibit their talents.

He said, the kids had also developed massively and showing great skills on the course, adding that they would soon produce one of the best golfers in the world through the Captain One initiative.

He urged other companies to come on board to develop golf and ensure Ghana became a major force in the sport. He also expressed appreciation to the Royal Golf Club for their support.

Safe-Child Advocacy (SCA) is a non-governmental and non-profit making organisation concerned about the plight of vulnerable children, particularly young girls who live and work on the streets of Kumasi.

The project which is under the Catholic Arch-diocese of Kumasi is a support system for all children in street situation and assist the towards rehabilitation, through street education, reintegration into families and access to basic education or skills training.