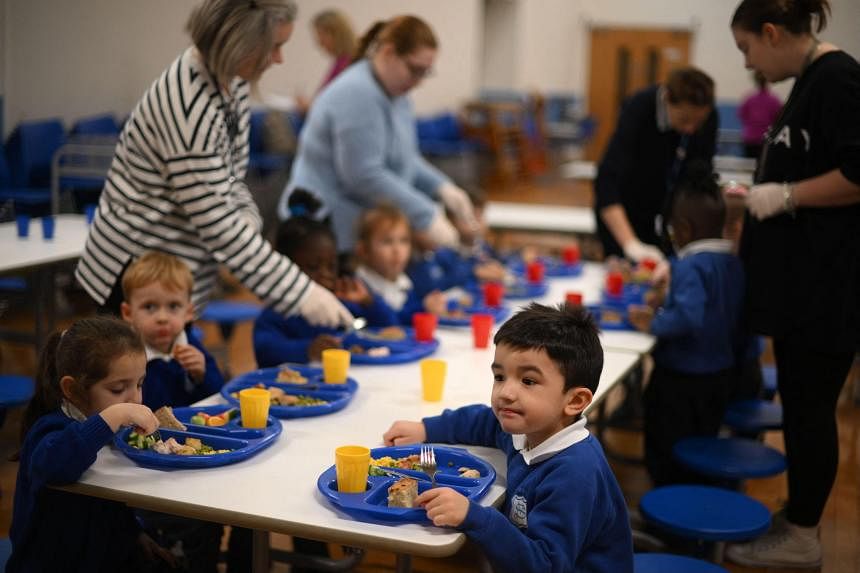 LONDON – When her two sons ask for snacks she can no longer afford, Ms Aislinn Corey, a preschool teacher in London, lays down a blanket on the floor and plays “the picnic game”. She takes an orange or an apple collected from her preschool’s food bank and slices it in thirds to be shared.

“We do it as an activity,” she said. “So they don’t know that mummy is struggling.”

She says dinners are often reduced to “pasta pasta pasta”, and she sometimes skips the meal entirely so there is more food for her children.

As the cost of grocery shopping and heating homes has hit records in recent months, the signs of distress are everywhere. The BBC has published dozens of online recipes costing less than a pound per portion. Some schools have turned down their heaters. And many communities have opened “warm spaces” – heated public rooms for people with cold homes.

But in Britain, one of the world’s richest countries, among the most shocking signs of the cost-of-living crisis is that a growing number of workers are struggling to feed their children.

Some are heading to food banks for the first time.

“It’s atrocious that it’s working people who are coming to us,” said Ms Vicky Longbone, a church minister who runs a food bank in Derby, in central England.

For the hardest-hit working families, the crisis has been long in the making.

Employment growth has left Britain with fewer out-of-work households, but many of those who found work still did not reach a decent standard of living, which left them vulnerable when inflation hit a 41-year high a few months ago, and wages failed to keep up.

Austerity measures under a decade of Conservative-led governments have also eaten away at the benefits paid to many low-income families, including working households. Since 2016, Britain has had one of the highest minimum wages in the world for most workers, benefiting some of the lowest earners. But many of them still cannot find enough hours of work, and the income of low earners has grown more slowly in Britain than in some other Western countries including Germany and France.

“It is harder because the past 10 years have been so awful,” said Dr Greg Thwaites, an economist at the Resolution Foundation, an independent research institute focused on living standards.

Then, in October, consumer prices surged 11.1 per cent from a year earlier. With energy and food costs driving the inflation, lower-income families, who spend a larger share of their income on essentials, were disproportionately hit. The rises slowed slightly in December, but consumer prices were still up more than 10 per cent compared with a year earlier.

Although some key statistics are not yet available, including the latest annual figure for child poverty, there are clear signs that many workers, including working parents, are under serious strain, as well as growing evidence that children are going hungry at home.

While the proportion of working families relying on food banks remains very small, they are now a noticeable slice of food-bank users. The Trussell Trust, which operates food pantries across the country and recorded more than 300,000 new users in the first half of last year, said that one-fifth of its clients in mid-2022 came from households with someone in a job.

In London, the Hackney Food Bank provided meals for 647 children in December, up from 330 a year earlier. Some schools have started providing free meals for every student, not just those who qualify for them through the welfare system, and a headmaster in a deprived area of the city said that more children and their parents had started relying for their breakfast on the free toast the school gives out at the front gate.

The Felix Project, which provides surplus food to organisations across London, said that half of the 183 charities it supports had recently reported full-time public sector workers using their services for the first time.

“You see ambulance crew, teachers going to the food bank,” Mr Kingsley Fredrick, who works for a food bank in east London, said at the end of another busy shift. “What does it say about a community, about a country?”

Low-income Londoners were the worst affected by the cost-of-living crisis, according to an analysis by the Joseph Rowntree Foundation, a British research institute, with added pressure from ever-higher rents. But the crisis has struck far beyond the capital, with Scotland and the north of England also hard-hit.

On a recent night, Ms Alicia Marcano, 46, a nurse, headed for the first time into a food bank in the east London neighbourhood of Hackney. She listened carefully to volunteers’ instructions, then, with her eyes downcast, started packing up cans of beans, biscuits and pasta. “This is new ground for me,” she said.

In recent months, she had saved money by packing lunches of hot dogs and burgers for her 12-year-old daughter instead of paying for a school meal.

“I wouldn’t normally give her anything like that,” she said. “But it’s cheap.”

Some lawmakers in the governing Conservative Party have argued that demand for food banks is not a reflection of real need. One, Mr Lee Anderson, said that the real “challenge” was that food-bank users “cannot cook properly, they cannot cook a meal from scratch, they cannot budget.”

A spokesman for the Department for Work and Pensions said that the government recognised that families were struggling, and that it had recently dedicated billions of pounds to helping people pay their bills during the cost-of-living crisis.

The Resolution Foundation said in a recent report that government had rightly prioritised lower-income families in these measures. But a YouGov survey commissioned for the report found that 11 per cent of people said that they had been hungry but not eaten because of a lack of money in the past month. Before the pandemic, that figure was 5 per cent.

The government also notes that child poverty dropped during the peak pandemic years, but experts said the decline was probably linked to pandemic-related government benefits that have ended.

More than one-third of children in England get free school meals, the government said, as can all children in the first three years of English schooling. But charities argue that many older children from low-income families do not meet the threshold to apply because their parents earn more than the cutoff point for the aid, which for many is 7,400 pounds a year.

For some children, school meals have recently turned into the only reliable, nutritious meal of the day, teachers and charities say.

Ms Sharon Grant, a part-time cashier at an Asda supermarket in London, said the cost of energy recently had often left her with little or no money for food. Like many low-income people, she has to pay for her heat and electricity up front, feeding money into a prepayment meter in her flat. In the winter cold, she said, 50 pounds (S$81) in the meter can last only a couple of days.

Some days, she resorts to feeding her 15-year-old twin sons and 11-year-old daughter cereal for dinner. On the worst nights, she has nothing to give them, and she has noticed they have started to struggle with their schoolwork.

“They are not as bright as they used to be,” she said. “They are hungry.” NYTIMES