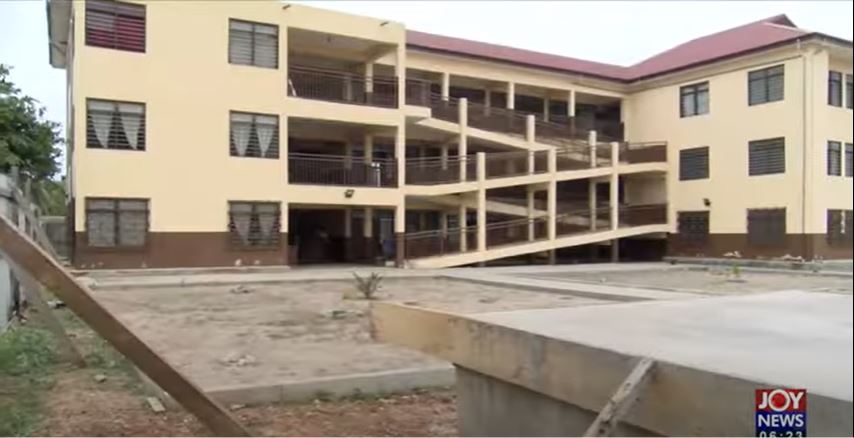 For four good years, students of the Osu Presby cluster of schools had to grapple in dire learning conditions while a newly built classroom facility sat idle.

But within the cluster, students of the Osu Presby Boys Primary School suffered the most. Their dilapidated school structure had classrooms filled with dust, potholes and broken desks.

Additionally, students were scorched by the sun and would take off their shirts at noon to fan themselves as a result of the excessive heat.

They had no fans, lights nor Louvre blades in their classrooms, and their washrooms were nothing to write home about. This made teaching and learning very difficult. Some students expressed their concerns;

“It affects my academics because sometimes I come to school thinking I’ll feel comfortable to learn in school. But rather, you come to school and face all these challenges.

“The classroom is full of heat. Almost everybody here has heat rashes because of the heat here,” the students told JoyNews.

While students suffered in these conditions, just opposite their school was the new classroom facility which had been barricaded and locked up by the contractor since 2017.

It sat idle for so long that it had developed weeds all over its premises. The contractor according to sources had still not been paid after building the facility hence, she refused to hand over the keys.

But all these were happening to the detriment of the children of the Osu Presby Cluster of schools. Parents and residents of the community called on government to come to the aid of their children.

“We don’t know exactly what is going on and the reason the children have still not been relocated. But were pleading with the government to come and finish it.”

JoyNews followed up on this story with the Municipal Assembly relentlessly.

The Municipal Chief Executive for the Korle Klottey Municipality, Nii Adjei Tawiah, in an interview with JoyNews’ Judith Awortwi-Tandoh promised the relocation of the children by the month of March, however, this did not happen.

According to him, the delay was caused by the lack of electricity and water.

“Because there was no water and also at a point no electricity, all these things needed to be sorted.”

In the month of July this year, however, students of the Osu Presby Boys Primary School were finally relocated to the new structure after years of waiting. Things have changed for the better now for these boys.

After constant reportage on the bad state of the school, students can finally heave a sigh of relief. They surely couldn’t hide their excitement.

“When we were there the sun was coming into our class. There was heat and no fresh air. But now when we came here, we have fans and light in our class and we have beautiful washrooms and all those things.”

Headmistress of the school, Lydia Okyere also expressed her joy, while she thanked JoyNews for their relentlessness.

“We are grateful to JoyNews, we even saw the pictures you took the other time and I was shocked. I said wow, how can a lady climb up a car for our sake we are grateful to you we hope you’ll continue to do this good work to help all those who are in need,” she said.

The Korle Klottey Youth Alliance which was also pushing for the relocation of the students were thrilled by this new development. Executive Director of the group Nii Otenkorang Ankrah spoke on their behalf.

“Today you can see when you went around they were all excited,… they’ve had new chairs, they have everything. So we want to thank everybody that put in the effort especially the MCE.”

Although students of the Osu Presby boys school have been moved into the new building, other students within the cluster still remain in the previous structure.

MCE for the Korle Klottey Municipality, Nii Adjei Tawiah however told JoyNews’, Judith Awortwi-Tandoh the assembly plans on moving the rest of the children by the end of the month.

“Once the concrete platform is matured enough for water to sit on and I believe that is sometime next week, all the children can move into the school now,” he said.