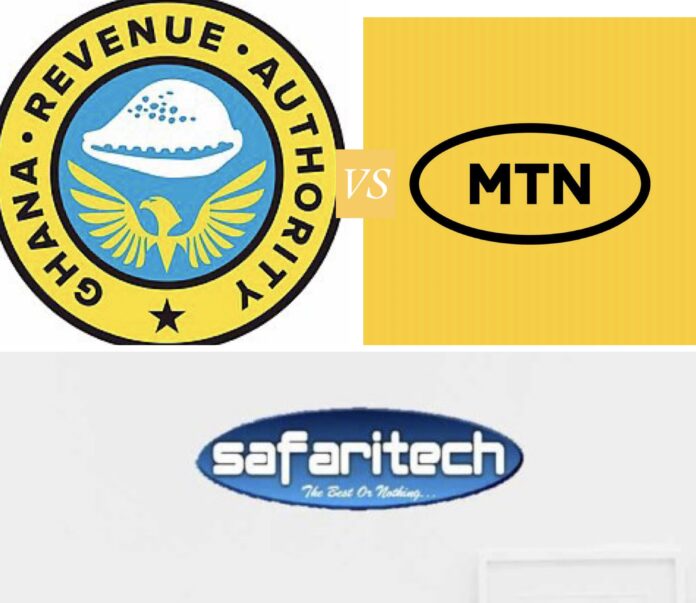 It is now clear that Ghana Revenue Authority (GRA) employed the services of a dodgy entity called Safaritech Ghana Limited to do a supposed audit on MTN Ghana, which resulted in GRA slapping MTN with a back tax bill of GHS8.2 billion plus.

Since their identity was exposed by Techgh24, Safaritech has deleted its Ghana website – www.safaritech.biz. But Techgh24 managed to get a few screenshots of some pages before they could shut it down.

Safaritech was said to have used a different methodology that supposedly revealed that MTN Ghana hid 30% of its revenue from GRA between 2014 and 2018, so the tax bill include the expected taxes from the hidden revenue, plus penalties.

MTN has challenged the claim and is currently taking advantage of the 21-day hold off to engage GRA on it. MTN Group CEO, Ralph Mupita has also declared the company’s intentions to fight the claim if the 21-day engagement fails to yield the desired result.

Beyond the 21-day engagement the Commissioner-General of GRA has the discretion to compel MTN to pay at least 30% of the stated tax bill while MTN continues to seek redress in other forums, include the law courts.

Meanwhile, the dodgy entity which did the supposed audit, Safaritech has collected or is waiting to collect its millions of dollars for making these claims against MTN, in spite of the fact that one of the globally reputed audit firms, KPMG did an independent audit of Safaritech’s work, and the result were completely at variance with that of Safaritech.

As stated above, since the dodgy characteristics of Safaritech were exposed by Techgh24, they have completely gone into hibernation and all the information they had put on their website, www.safaritech.biz is now offline and have remained offline for almost a week now.

But before they could put off the website to hide their questionable claims of having a headquarters in London, being a base of IMF, GTZ, UNDP and ATRN, and having done telecoms audit in several countries, Tecgh24 took screenshots of some of those claims as is on their now defunct website.

Find the screenshots below:

Figure 1 shows the a page that spells out the claims of Safaritech about their work in AUDITING. Under that they claim, among other things to provide advisory services to national revenue agencies (like GRA) and also to be a base of the IMF among other reputable entities.

In Figure 2, Safaritech claimed they had done auditing/tax assessment jobs in a number of countries with sponsorship from IMF, USAID and the respective revenue authorities of those countries.

Techgh24 was in the process of capturing other pages when the website was taken down with the claim that it was being updated and it has since never come up again. We had earlier written to IMF via [email protected] to verify Safaritech’s claim of being a base of the IMF. We believe that a call from IMF to Safaritech may have triggered the shutting down of their site. But we are yet to confirm that belief.

Because Safaritech has now hidden its online details in Ghana, Techgh24 did a search about them in London, where they claim to be headquartered, and the results were quite revealing and damning.

Here are screenshots as evidence:

Once it is clear that Safaritech is a dodgy entity as revealed by questionable claims in Ghana and shady details in London, the focus now turned to Kenya where the company originally hailed from.

Checks on its details in Kenya did not throw up any company website, except a general business directory, where only a street address and phone number is available for Safaritech Limited, as contained in the screenshots below.

And on one of the pages, Safaritech Limited is described as a company into General Business – nothing was said about the claims it made on the defunct Ghana website.

This is the entity the Ghana’s tax collector, Ghana Revenue Authority (GRA) employed to audit its biggest and most decorated taxpayer, MTN Ghana.

Techgh24 wonders whether the GRA itself would allow company with this kind shady details to audit the GRA, much less any entity in Ghana.

Till date, there is not a shred of evidence to support the claims Safaritech made to GRA as captured on its deleted website. That is not a concern for GRA, but they still trust is the supposed strange methodology Safaritech claimed to have used to audit MTN and come up with the result that  MTN actually evaded tax between 2014 and 2018.

Techgh24 and other public spirited individuals and entities are still looking into this matter and will keep you posted.