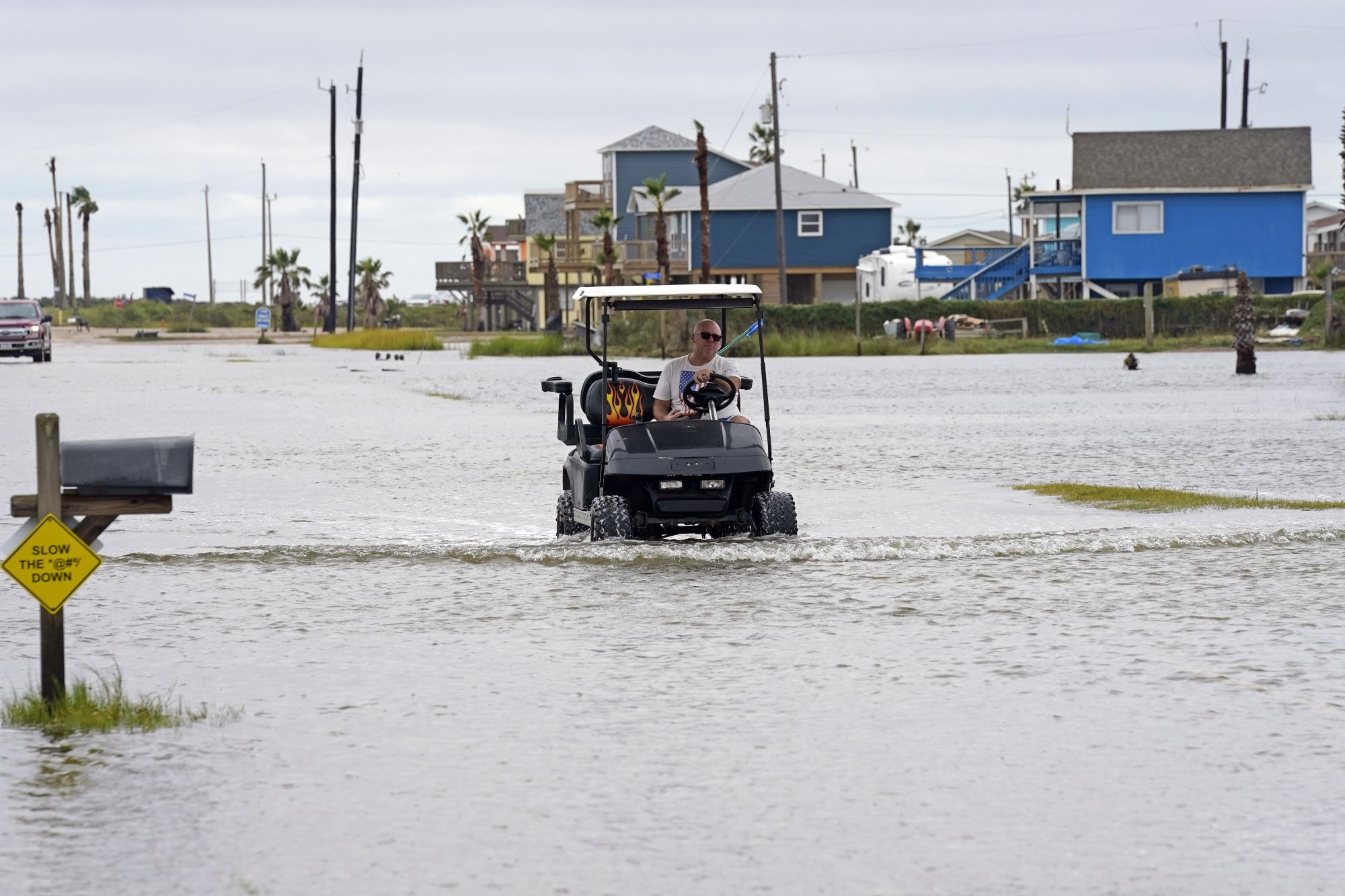 Tropical Storm Nicholas weakened to a tropical depression early Tuesday evening after slowing to a crawl over southeastern Texas and southwestern Louisiana but still drenching the area with flooding rains.

The downgrade came the same day Nicholas blew ashore as a Category 1 hurricane, knocking out power to a half-million homes and businesses and dumping more than a foot (30.5 centimeters) of rain along the same area swamped by Hurricane Harvey in 2017.

Nicholas could potentially stall over storm-battered Louisiana and bring life-threatening floods across the Deep South over the coming days, forecasters said.

Nicholas made landfall early Tuesday on the eastern part of the Matagorda Peninsula and was soon downgraded to a tropical storm. As night approached Tuesday, its center was 60 miles (95 kilometers) east-northeast of Houston, with maximum winds of 35 mph (55 kph) as of 7 p.m. CDT Tuesday, according to the National Hurricane Center in Miami. However, weather radar showed the heaviest rain was over southwestern Louisiana, well east of the storm center.

The storm is moving east-northeast at 6 mph (9 kph). The National Hurricane Center said the storm may continue to slow and even stall, and although its winds will gradually subside, heavy rainfall and a significant flash flood risk will continue along the Gulf Coast for the next couple days.

In the small coastal town of Surfside Beach about 65 miles (105 kilometers) south of Houston, Kirk Klaus, 59, and his wife Monica Klaus, 62, rode out the storm in their two-bedroom home, which sits about 6 to 8 feet (1.8 to 2.4 meters) above the ground on stilts.

He said it rained all day on Monday and, as the night progressed, the rainfall and winds got worse.

Sometime around 2:30 a.m. Tuesday, the strong winds blew out two of his home’s windows, letting in rain and forcing the couple to continually mop their floors. Klaus said the rainfall and winds created a storm surge of about 2 feet in front of his home.

“It looked like a river out here,” he said.

Nearby, Andrew Connor, 33, of Conroe, had not been following the news at his family’s rented Surfside Beach vacation house and was unaware of the storm’s approach until it struck. The storm surge surrounded the beach house with water, prompting Connor to consider using surfboards to take his wife and six children to higher ground if the house flooded.

The sea never made its way through the door, but it did flood the family sport utility vehicle, Connor said.

“When I popped the hood, I had seaweed and beach toys and all that stuff in my engine,” he said.

Nicholas is moving so slowly it will dump several inches of rain as it crawls over Texas and southern Louisiana, meteorologists said. This includes areas already struck by Hurricane Ida and devastated last year by Hurricane Laura. Parts of Louisiana are saturated with nowhere for the extra water to go, so it will flood, said University of Miami hurricane researcher Brian McNoldy.

“It’s stuck in a weak steering environment,” McNoldy said Tuesday. So while the storm itself may weaken “that won’t stop the rain from happening. Whether it’s a tropical storm, tropical depression or post-tropical blob, it’ll still rain a lot and that’s not really good for that area.”

More than a half-million homes and businesses had lost power in Texas, but that number dropped below 200,000 by late Tuesday afternoon, according to the website poweroutage.us that tracks utility reports. Most of those outages were caused by powerful winds as the storm moved through overnight, utility officials said. Across Louisiana, about 89,000 customers remained without power Tuesday afternoon, mostly in areas ravaged by Hurricane Ida.

Nicholas brought rain to the same area of Texas that was hit hard by Harvey, which was blamed for at least 68 deaths, including 36 in the Houston area. After Harvey, voters approved the issuance of $2.5 billion in bonds to fund flood-control projects, including the widening of bayous. The 181 projects designed to mitigate damage from future storms are at different stages of completion.

“It’s not crazy amounts of rain. It isn’t anything like Hurricane Harvey kind of thing with feet of rain,” McNoldy said. Harvey not only stalled for three days over the same area, it moved a bit back into the Gulf of Mexico, allowing it to recharge with more water. Nicholas won’t do that, McNoldy said.

Nicholas, expected to weaken into a tropical depression by Tuesday night, could dump up to 20 inches (51 centimeters) of rain in parts of southern Louisiana. Forecasters said southern Mississippi, southern Alabama and the western Florida Panhandle could see heavy rainfall as well.

On Tuesday, heavy rains from Nicholas pelted blue tarps that covered roofs damaged by Ida all over southern Louisiana.

Ida destroyed one building and left holes in the roof of the main plant at Motivatit Seafoods, a family-run oyster wholesaler in Houma, Louisiana. With rain from Nicholas pouring in on high-pressure processing equipment, owner Steven Voisin said he didn’t know whether the machines could be saved after the latest round of tropical weather.

“And many people from here to New Orleans have this or more damage,” he said. “They’re not going to recover quickly or easily.”

Louisiana Gov. John Bel Edwards declared a state of emergency Sunday night, ahead of the storm’s arrival in a state.

In southwestern Louisiana, Lake Charles Mayor Nic Hunter said Monday that crews were scouring the drainage system to keep it free from debris that might clog up and cause flooding. But after multiple natural disasters in such a short period of time, he said he’s worried about residents’ state of mind.

Last year, Category 4 Hurricane Laura caused substantial structural damage across the city of nearly 80,000 residents. Weeks later, Hurricane Delta ripped through the same area. Freezing temperatures in January burst pipes across the city, and a May rainstorm swamped houses and businesses yet again. Some residents have had to gut houses multiple times over one year.

“With what people have gone through over the last 16 months here in Lake Charles, they are very, understandably, despondent, emotional. Any time we have even a hint of a weather event approaching, people get scared,” he said.