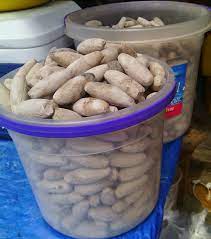 He explained that “baked clay may contain worms which could thrive, feed on the red blood cells, and affects one’s immune system.

“It is very unsafe to consume in large quantities especially on a daily basis as it could cause blockage of the intestine as well as lead to low blood iron levels”.

He explained that if the consumer is pregnant, she may put the unborn baby’s life at risk.

Mr Angmortey was speaking to Ghana News Agency in an interview at Ada and emphasised that iron was very important in maintaining many body functions as such the production of haemoglobin, healthy hair, skin, hair and nails and a lot more.

He said a deficiency in iron when causing anaemia could be seen through unexpected fatigue, shortness of breath, rapid heartbeat, and hair loss among other factors.

He recommended that people diagnosed with anaemia must eat a balanced diet which would improve the body system saying that diets like meat, poultry, fish, and leafy green vegetables have the potency in increasing iron.