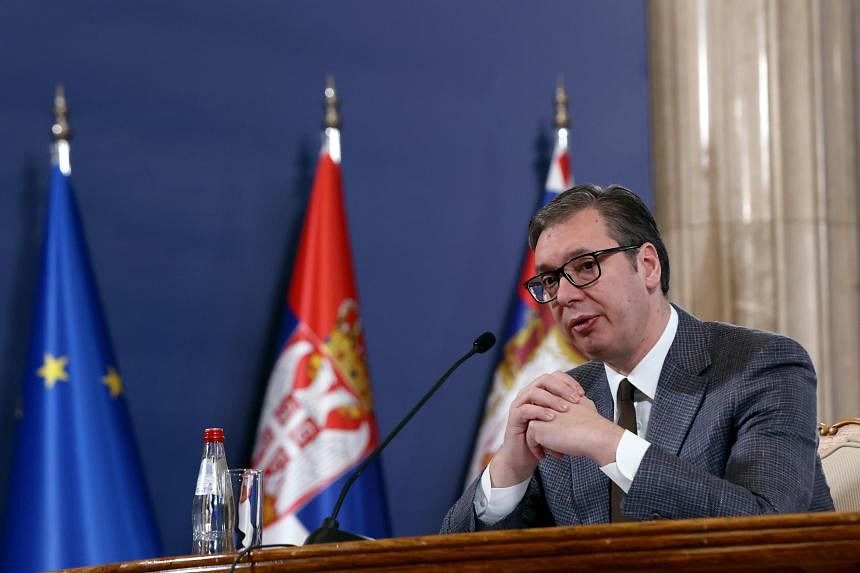 BELGRADE – Serbia will look into a European Union plan that proposes normalising ties with Kosovo as it risks losing its chance to join the bloc, President Aleksandar Vucic said.

Serbia’s leader for more than a decade, Mr Vucic announced plans for a broad public debate to consider the proposal.

According to media reports, it envisages the Balkan country and Kosovo developing neighbourly relations as equal, sovereign states.

Belgrade’s refusal to recognise Kosovo, which broke away after they fought a 1998-1999 war, is a key stumbling block to Serbia joining the EU.

“We would become politically and economically lost without EU support,” Mr Vucic told reporters in Belgrade on Monday, just days after meeting US and EU envoys who are trying to broker a lasting agreement.

He said the plan is worth considering, even though “it’s not easy to find anything that would delight us in this document. Quite the contrary”.

The proposal was drawn up by Germany and France and presented as an EU offer.

It doesn’t demand that Serbia sign off on Kosovo’s independence.

But Serbia would have to stop lobbying against Kosovo’s membership in international bodies, according a draft of the document published by the Danas newspaper.

Under the reported 10-point plan, Kosovo would gain full international acceptance, while Serbia may get some autonomy for Serbs living in Kosovo.

Kosovo would have to guarantee the safety of centuries-old churches and monasteries that Serbia considers as crucial monuments to its religion and history, while Belgrade would keep some ties to Serb enclaves on Kosovo territory, according to the report.

Mr Vucic didn’t elaborate on the details of the plan.

“Advancing on this proposal would bring considerable benefit for both sides,” Josep Borell, the EU’s foreign policy chief, told reporters in Brussels on Monday.

“I consider that this is the only way to break the vicious cycle of crisis on the ground and to reduce the risk for further escalation.”

The EU is united behind its offer to the wartime foes, including five members of the bloc that haven’t yet recognised Kosovo as a country, Mr Vucic said.

The push for a deal follows a new flare up in tensions between the Balkan neighbours that have persisted for more than two decades.