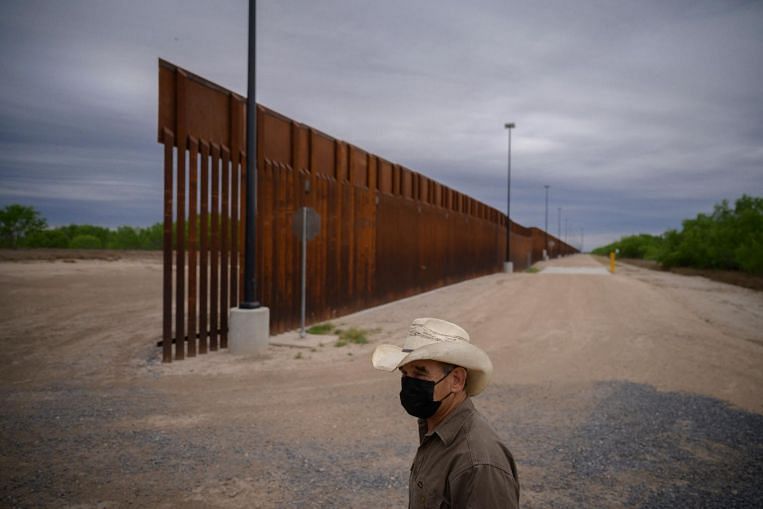 It is unclear if the state has the authority to build a wall in an attempt to deter immigrants, a majority of whom have been fleeing poverty and violence in Central America.

Speaking at a meeting with state law enforcement officials in Del Rio, a small border city that has seen a large influx of immigrants since President Joe Biden took office in January, Abbott said he expected to announce more details about the wall next week.

Abbott explained that he would start by setting up barriers to identify people trying to cross the border and by deploying additional law enforcement agents to assist the Border Patrol. He has blamed the increase in migrant crossings on Biden’s unwinding of Trump’s restrictive border rules.

“It is out of control, and a change is needed,” he said. “Some of these border barriers will be built immediately.” Then the governor revealed, to thundering applause, that Texas would also build a border wall.

“While securing the border is the federal government’s responsibility, Texas will not sit idly by as this crisis grows,” Abbott said, adding, “Our efforts will only be effective if we work together to secure the border, make criminal arrests, protect landowners, rid our communities of dangerous drugs and provide Texans with the support they need and deserve.”

In March, Abbott put into action what he called Operation Lone Star, which allows the deployment of hundreds of agents and resources along the southwestern border to combat the smuggling of humans, drugs and guns, said Victor Escalon, a regional director with the Texas Department of Public Safety. But deciding to build a border wall may be a first for a state executive.

Abbott’s announcement was quickly criticised by immigration advocates, who said it would most likely face legal challenges.

“There is no substantive plan,” said Edna Yang, co-executive director of American Gateways, an immigration legal aid and advocacy group in Texas. “It’s not going to make any border community or county safer.”

The American Civil Liberties Union of Texas tweeted, “To be clear, this is an attempt to distract from his governing failures while targeting vulnerable immigrants.”

Trump made the border wall a signature campaign promise and often pressed his homeland security officials to speed the construction of the project, waiving federal contracting and environmental laws in the process.

During his campaign, Trump promised that Mexico would pay for the wall, but he instead redirected billions from Defence Department funds that were initially meant for anti-narcotics or construction programmes.

His administration eventually built more than 450 miles (724km) of new wall, primarily in areas where dilapidated barriers once stood. Most of the construction was in Arizona, where migrants already struggle through rough terrain to cross the border, rather than in South Texas, an area prone to illegal crossings.

Private landowners in South Texas emerged as an obstacle to Trump’s construction, with many resisting the administration’s efforts to seize their land through eminent domain. And then Biden suspended construction of the wall on his first day in office, part of a series of actions to roll back Trump’s immigration agenda.

The Biden administration and Abbott have clashed over how to handle the thousands of unaccompanied minors who have crossed the border in recent months. The administration was unable to redirect federal funds designated for disaster aid to assist in border processing when Abbott refused to provide his consent.

At the time, Abbott said that the federal government, not Texas, was responsible for asserting control over the border.

When the migrant children filled detention facilities run by the Border Patrol, the Biden administration responded by opening temporary facilities in a Dallas convention centre, a San Antonio sports arena and other vacant sites around the country.

While Vice-President Kamala Harris was in Guatemala this week, she discouraged potential migrants from travelling to the border, telling them, “Do not come.”

The Biden administration still uses a pandemic emergency rule, known as Title 42, that empowers border agents to rapidly turn away most single adults and many families crossing the border into the hands of Mexican authorities.

Biden has exempted unaccompanied minors from the policy, which prevents most other migrants from having a chance to apply for asylum.

Some families, however, have been able to cross into Texas because of a change in Mexican law that barred the detention of small immigrant children, and a lack of shelter capacity south of the border. Instead of detaining those families, US authorities release many into Texas communities.