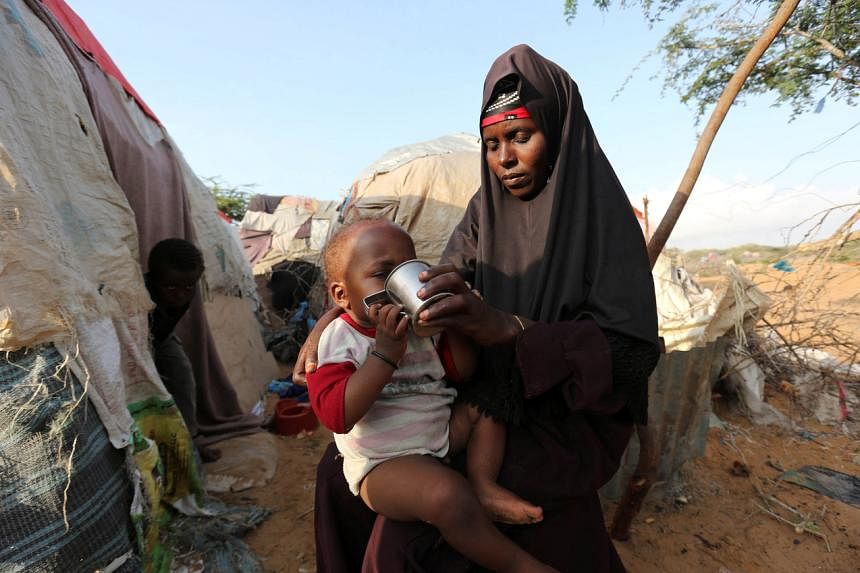 MOGADISHU (AFP) – As flies buzz over his tiny body, two-year-old Sadak Ibrahim barely whimpers, too weak to cry or shoo them away – a heartbreaking glimpse of the hunger crisis gripping Somalia.

The Horn of Africa nation is on the brink of a second famine in just over a decade, enduring its worst drought in 40 years after failed rainy seasons since late 2020 wiped out crops and livestock.

With a fifth monsoon forecast to fail, the United Nations warned this month that time was running out to save lives, as it urged donors to contribute more to the relief effort.

UN humanitarian chief Martin Griffiths said the situation was worse than the 2011 famine, when 260,000 people died, more than half of them children under the age of 6.

Aid is slowly making its way to Somalia following delays caused by the war in Ukraine, which also sent the cost of transport and emergency supplies soaring. But many fear the help will arrive too late for the country’s youngest victims like Sadak, with around 730 children already reported dead in nutrition centres between January and July this year, according to Unicef.

At De Martino Hospital in the capital Mogadishu, Sadak’s anxious mother Fadumo Daud sat vigil by the toddler’s bedside, a feeding tube dangling from his face, as she prayed for a miracle.

“He is the only child I have, and he is very sick as you can see,” the young woman told AFP, recounting the three-day journey that brought her to Mogadishu from Baidoa – one of the epicentres of the crisis.

In recent years, climate disasters have increasingly become the main driver of migration in Somalia, which is also grappling with a brutal 15-year Islamist insurgency.

Every day, dozens of people stream into camps set up for displaced families in Mogadishu.

The International Rescue Committee (IRC) runs seven health and nutrition centres in and around the capital, but their resources are sharply stretched with the crisis showing no signs of abating.

“The number of new arrivals has increased dramatically starting from June this year,” IRC nutrition officer Faisa Ali said. Most of the children turn up malnourished, she said, with their numbers trebling from a maximum of 13 a day in May to 40 now.

A mother of 10, Ms Nuunay Adan Durow fled her home and travelled 300km to find medical help for her three-year-old son Hassan Mohamed, his limbs swollen due to severe malnutrition.

“For the last three years, we have not harvested anything due to lack of rain,” Ms Durow said, describing how she was forced to trek for two hours daily to find water for her family.

“We faced a terrible situation,” the 35-year-old said, cradling Hassan in her arms as they awaited medical attention at an IRC centre on the outskirts of Mogadishu.

The drought has also affected parts of Kenya and Ethiopia, but the risks for Somalia are particularly grave, with 200,000 people in danger of starvation and around 1.5 million children facing acute malnutrition by next month, the UN said.

The crisis has not spared even traditionally fertile regions such as Lower Shabelle, where drought-stricken communities would seek refuge in the past, hoping to find sustenance there.

“We used to farm and get vegetables to feed our children before the drought affected us,” Ms Fadumo Ibrahim Hassan, 35, a widowed mother-of-six, said. Now, “we live on whatever God gives us”, she said.

A recent arrival in Mogadishu, her two-year-old daughter Yusro’s condition deteriorated to the point that the IRC staff could no longer care for her. Weighing just 5.8kg – half that of a healthy girl the same age – Yusro was dangerously malnourished, according to the IRC medical team, who said she urgently needed to be admitted to a hospital.

“The ones we are receiving here are the worst cases with complications,” she said. “Sometimes, those we have treated come back to the hospital after getting sick again.” AFP