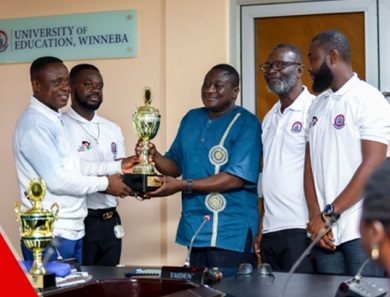 Professor Mawutor Avoke, Vice-Chancellor of University of Education, Winneba (UEW), has applauded the University’s sports team at the just ended 27th Ghana Universities Sports Association (GUSA), for their sterling performance amidst some challenges to emerge the overall champions of the tournament.

Prof.  Avoke made the commendation at a ceremony held at the University Council Chamber at Winneba, when the team paid a courtesy call on him to present the 10 trophies won to emerge the overall champions of the tournament held at Kumasi, and to thank the Management for supporting them to earn that enviable achievement.

He stated that the conduct of the coaches, staff and students who were at the games was very satisfactory compared to others, thereby raising the standards for them to win the tournament.

According to Prof. Avoke, with the limited resources provided by management, motivation and encouragement by coaches, the contingents and coaches came back with the most converted trophies that had never been assembled in the history of GUSA games.

“We need to celebrate them for lifting the banner of the university high, UEW salute you, we are grateful and appreciate you.

“We will host the entire team when the next semester resumes in January to let you feel that management is really behind you, ” he assured.

Dr. Emmanuel Osei Sarpong, Director of the University Sports Directorate and leader of delegation presented the trophies and thanked the management for supporting the team in diverse ways to Kumasi to achieve this enviable feat.

He informed the gathering that the team was crowned the overall champions with 10 trophies and 61 medals, made up of 22 golds, 22 silver and 17 bronze medals.

He appealed to the management of the university, to do everything within its jurisdiction to develop a state-of-the-art facility, employ more substantive coaches, support the directorate with required resources, increase the remuneration of the coaches and to sponsor their end of year coach’s retreat.

He indicated that the team performed very well throughout the tournament with the limited resources to raise the flag of the university high.

It was their hope that management will adhere to their plea to help students to train harder without hindrance to enable the department to produce skilful and fully prepared contingents to continue to emerge overall champions in subsequent universities games.

He further expressed the team’s gratitude and appreciation to the Vice-Chancellor and the entire management of the University as well as individuals for their unwavering Support and prayer to the team.

Among personalities at the ceremony was Professor Andy Birikorang, Pro-Vice Chancellor of the University, Deans, Directors, lecturers and some staff.