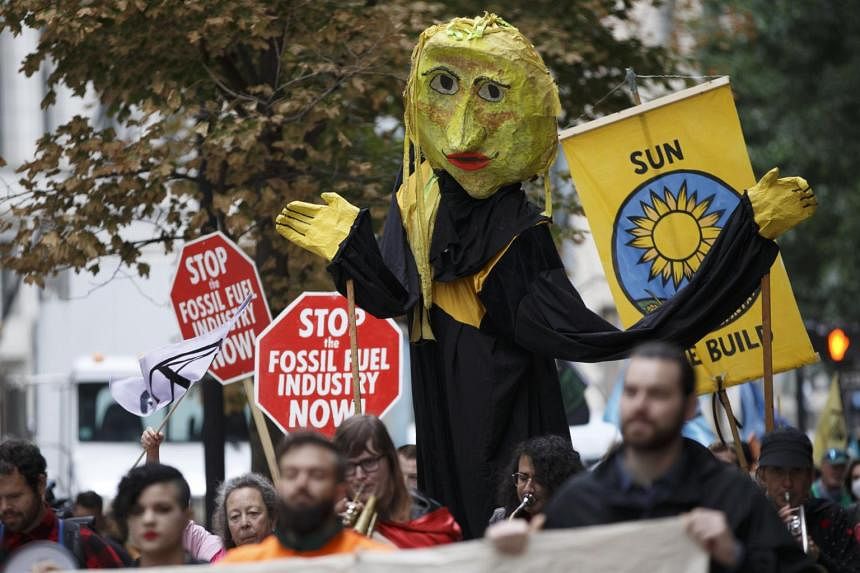 SINGAPORE – Major US banks are threatening to exit a leading climate financial alliance, fearing they might be sued over the alliance’s stringent decarbonisation commitments, the Financial Times and Bloomberg reported on Wednesday.

Citing people familiar with the matter, Bloomberg said banks including JPMorgan Chase, Morgan Stanley and Bank of America are having second thoughts and might walk out of the Glasgow Financial Alliance for Net Zero (GFANZ).

The same banks are also named in a separate report published this week by activist group Reclaim Finance. The report shows the banks are among a number of US financial institutions that have continued to lend to polluting coal projects after signing up to the alliance, which sets targets and standards for members to cut emissions.

GFANZ was launched last year and now includes more than 500 members across sectors including banking, investment management and insurance. It is co-chaired by Michael Bloomberg, UN Special Envoy on Climate Ambition and Solutions, and Mark Carney, UN Special Envoy for Climate Action and Finance.

The alliance took centre stage at the COP26 climate conference in Glasgow last year with claims that members with US$130 trillion (S$184 trillion) in assets backed the alliance’s targets to reach net-emissions by 2050 and set interim targets. Yet the alliance’s reputation has been undermined by accusations of greenwashing with some members signing up to the targets yet continuing to finance fossil fuel projects.

GFANZ, which in June launched an Asia-Pacific network and office in Singapore, in August warned members about fossil fuel investments.

In a statement, Mr Bloomberg, Mr Carney, and GFANZ vice chair Mary Schapiro said that there was no rationale for financing new coal projects and that doing so was inconsistent with achieving net zero emissions and limiting global warming to 1.5 deg C.

Coal is the single largest source of global carbon emissions that are heating up the planet.

“We, therefore, reinforce those calling for the phase-out of all unabated coal in advanced economies by 2030 and globally by 2040,” they said. “Unabated” refers to projects that do not capture the carbon dioxide (CO2) released when coal is burned.

According to the FT, the banks’ biggest concern is over strict targets on phasing out coal, oil and gas recently introduced by the UN’s Race to Zero campaign, a UN-led net-zero standard-setting body that accredits pledges made by GFANZ. Among the targets was an explicit requirement “to phase down and out unabated fossil fuels, including coal”.

Some members said they felt blindsided by tougher criteria.

“I am close to taking us out of these global green commitments – I’m not going to allow third parties to create legal liabilities for us and our shareholders. It is immoral and irresponsible,” the FT quoted a senior executive at a US bank as saying.

“What if we get it wrong, make a mistake, or someone lies? Then the bank can be sued. That is an unacceptable risk.”

Yet US banks remain major coal financiers, despite the United Nations and the International Energy Agency also saying there should be no new coal projects.

From 2019to November 2021, US banks provided US$207 billion to the coal industry, with US$40 billion going to coal developers from JPMorgan Chase, Citigroup, Bank of America, Morgan Stanley and Goldman Sachs alone, said Paris-based Reclaim Finance, which tracks fossil fuel funding.

They said US banks are the second biggest providers of loans and underwriting services to the coal industry after Chinese banks.

Since joining GFANZ in 2021, US banks have continued to finance some of the world’s biggest coal developers, Reclaim Finance said.

For instance, right after joining the Net Zero Banking Alliance – a constituent member of GFANZ – Citi provided two loans of US$503 million each to Japanese coal power giant Mitsubishi, which is currently developing the controversial Vung Ang II 1,200-megawatt coal plant in Vietnam.

“As we come out of a deadly global warming-fuelled northern hemisphere summer, US banks keep on financing the expansion of coal, with no plans in sight to exit from the sector,” Reclaim Finance said in its report.