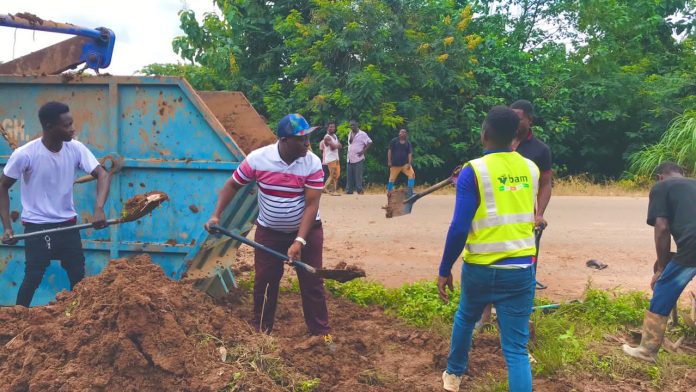 Mr Isaac Kofi Marfo the District Chief Executive for Atwima Mponua, has implored citizens in the Municipality to revisit the olden days where communal labour was used to develop communities even before central government-initiated projects.

He said due to self-help initiatives, communities did not wait for government interventions to fix their local problems and called on citizens to rekindle that communal spirit to accelerate development.

He made the call when he joined the people of Serebourso near Nyinahin for a communal labour exercise.
They created a drainage system and desilted the gutters that often-caused flooding around their basic school which mostly forced the school to close any time there was a heavy down pour.

The DCE said over-reliance on the government for every need of the people would only slow the pace of development because the government had a greater responsibility of evenly distributing the national resources.

He commended the people, civil servants, and politicians for participating in the exercise and later interacted with the teachers and pupils to familiarize himself with their problems.

Mr Isaac Kwame Asiamah, Member of Parliament assured the people of the government’s commitment to fulfil its promises