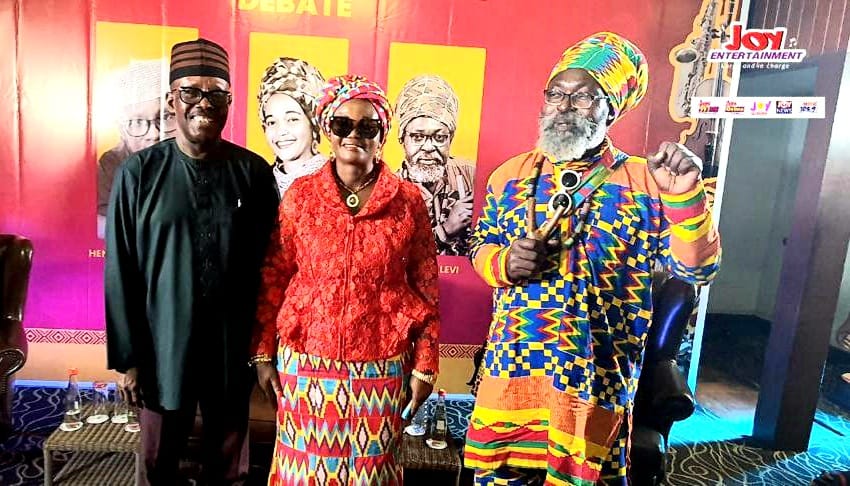 A key fall out from the MUSIGA presidential debate, powered by Joy Entertainment on Saturday is the revelation that none of the contenders is willing to work with each other as President and Vice President.

Those gunning for the MUSIGA presidency are; Bessa Simons, Deborah Freeman and Ras Caleb Appiah Levi.

When the moderator and host of Showbiz A-Z on Joy 99.7 FM, George Quaye put the question, ‘would you have any of your competitors as Vice President considering their individual competencies?’ all three candidates, answered in the negative.

Acting MUSIGA President, Bessa Simons explained that, “Both of them were given the mandate and they never worked when we were in crisis. I got him [Ras Caleb] an office, and he hasn’t taken over. My sister [Deborah Freeman] here, for Obour’s last term, she never worked, never provided any report, just once I think.”

Justifying his reasons, he said, “I see them as, they will come and collect titles and go and sit at home. MUSIGA does not need that.”

The only female candidate among the three, Deborah Freeman described Bessa Simons as a “fantastic keyboardist”, yet will not work with him because “he lacks the potential to run an office.”

She believes that the position requires administrative experience and expertise to run daily activities corporately, not musical competence.

Madam Freeman disqualified Ras Caleb by describing him as a litigant who “could ignore constitutional structures, and choose to settle all sorts of matters in court. Maybe one day when we come to the office and I’m not able to get him water to drink, he’ll sue me,” she said to the amusement of the audience.

Ras Caleb Appiah Levi also rejected both contenders. Without mincing words, he stated, “I can’t work with any of them, because they already belong to a corrupt regime.”

The MUSIGA presidential election is slated for January, 2022, with many stakeholders keen to ascertain who eventually gets the opportunity to lead the Union and steer its affairs in the right direction.

The MUSIGA presidential debate, presented a platform for all three aspiring candidates to justify their inclusion in the January, 2022 election which seeks to select a visionary leader for the Union.

As it is, stakeholders and observers can only keep their fingers crossed and wait patiently for the D-day with bated breath.