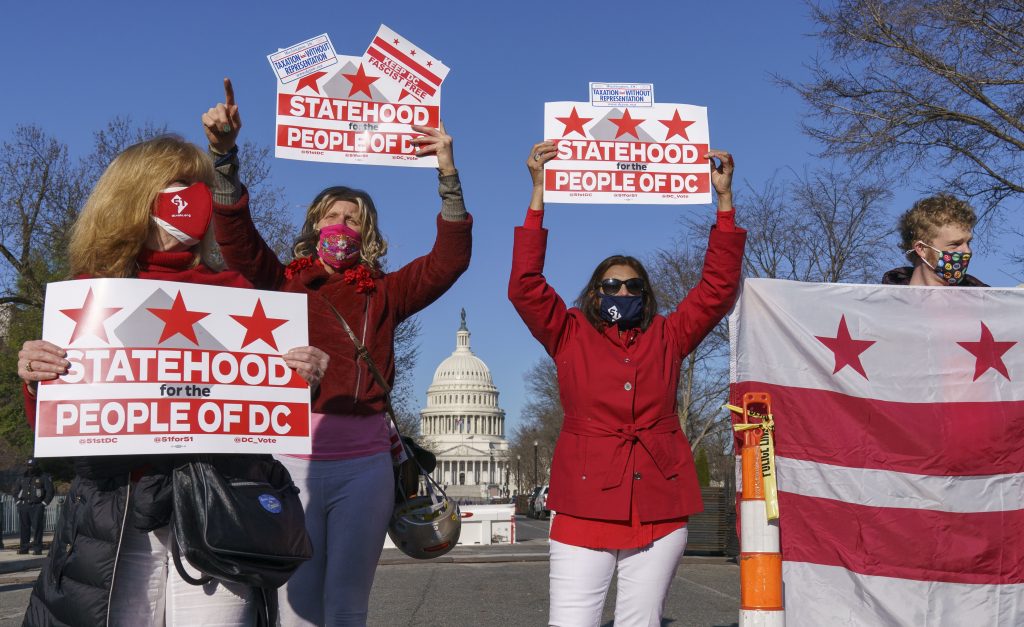 What happens when you live in a national capital that is not part of any state or province, whose federal representatives cannot vote on legislation, and where local laws can be vetoed by lawmakers from other parts of the country?

That’s the reality still faced by over 712,000 Americans — nearly half of whom are Black — simply by residing in Washington, D.C.

Democrats and local activists are trying to change that by making the District of Columbia the 51st state in the union — a fight that is now closer to becoming reality than ever before.

The House of Representatives voted late last month to advance legislation on statehood for the second time in less than a year. Last summer, the bill died in the Republican-controlled Senate when leaders refused to bring it up for a vote.

With Democrats now controlling the Senate, the issue is set to finally face one last hurdle, though the bill’s passage remains a tall order.

“It’s a pretty big oversight that’s long past the point where it should have been dealt with,” said Matthew Lebo, chair of the department of political science at Western University.

Here’s how D.C. got to this point, and why the debate over statehood matters.

Why is Washington D.C. different?

The District of Columbia sits on the Potomac River between the states of Maryland and Virginia, both of which ceded land to create the district soon after the country’s founding.

The Constitution granted Congress exclusive jurisdiction over the District after James Madison, one of the Founding Fathers, argued that the nation’s capital must be independent to preserve its safety. It was also argued that having the capital within an existing state would give that state undue influence over the federal government.

That “exclusive jurisdiction” meant Congress had ultimate authority over the district’s affairs, including its laws and how the city was run.

Even as the city took steps toward self-government — culminating in the 1973 Home Rule Act that provided for an elected mayor and council — Congress was still effectively in charge, and all District laws remain subject to review by a congressional committee.

The city also had to wait until the passage of the 23rd Amendment in 1961 before they could vote for president.

Yet because the district is not a state, it does not have senators or representatives in Congress who can vote on legislation, or confirm administration officials or Supreme Court judges. Instead, there is an elected delegate who can only introduce bills and sit on committees.

“When I was younger and more uninformed … me and my age group was just like, ‘Oh, this is kind of cool, we’re very unique,” Powell said.

“As I got older and more educated on how our lack of statehood is linked to disenfranchisement, that excitement and happiness around being uniquely situated took a step back towards the disappointment of being uniquely marginalized.”

“As the District became more Democratic though, the momentum behind the (statehood) movement dropped off,” he said. “We’ve gotten these little pieces of autonomy, these little crumbs, but never the full cake.”

What would the statehood bill do?

The district’s current delegate, Democrat Eleanor Holmes Norton, has been fighting for decades for Washington, D.C., statehood and introduced the legislation that’s now being debated.

The legislation would turn Washington, District of Columbia, into the state of Washington, Douglass Commonwealth — named after Frederick Douglass, the Virginia-born first president and the Maryland-born abolitionist and former slave.

The bill would also reduce the size of the federal district to a tourist-friendly area that includes the White House, the Capitol, the Supreme Court, federal monuments and the federal executive, legislative and judicial office buildings adjacent to the National Mall and the Capitol.

Congress would retain control of that five-square-kilometre area, while the local government would control what is currently the residential and business area.

Under the bill, one congressional representative and two senators would represent the state in Congress and be elected by its residents, and have the power to vote on federal legislation and judicial appointments. The new state would also retain D.C.’s three Electoral College votes.

If D.C. were to become a state, it would become the third least populous state, ahead of Wyoming and Vermont. Democratic Rep. Ayanna Pressley said at a House oversight committee hearing in March that D.C. would still also become the Blackest state in the country.

Polling released last month by Data for Progress shows only a slim majority of voters — 54 per cent — support statehood for D.C., up from 29 per cent in a 2019 Gallup poll.

The Data for Progress poll found 74 per cent of Democrats support the move, while only 34 per cent of Republican voters feel the same.

Where do Democrats and Republicans stand?

Norton’s bill, H.R. 51, was co-sponsored by 216 House Democrats — nearly the entire delegation and a record number for a single piece of legislation.

The White House has signalled support for statehood, saying in a statement last month that establishing the 51st state “will make our Union stronger and more just.”

At a press conference announcing his party’s intent to hold a vote on H.R. 51, House Majority Leader Steny Hoyer said statehood would ensure D.C.’s residents “are, in fact, equal citizens to all their brothers and sisters throughout the United States of America.”

Hoyer also noted that many of the people who live in D.C. move there from other parts of the country to work for the federal government — effectively losing the representation they had in their home states.

The Senate version of the bill, S. 51, has 44 Democratic co-sponsors out of the party’s 50 senators.

Senate Majority Leader Chuck Schumer has said he intends to bring the bill to the floor for a vote, something Republicans refused to do when they were in power.

Yet passage is still far from certain. Under current filibuster rules, any piece of legislation would need at least 60 senators to vote in favour — meaning at least 10 Republicans would need to sign on.

That threshold is in place of a traditional filibuster rule that allows senators to delay voting on a bill through stalling tactics like marathon speeches.

The filibuster rule would need to be reformed or eliminated altogether for D.C. statehood to stand a chance, Lebo says.

“But you also have moderate Democrats like Joe Manchin and Krystyn Sinema who have said they don’t want to do that,” he said, while noting those senators have also not committed to supporting statehood.

“So Democrats are in a very precarious position.”

Powell, too, says the filibuster needs to go. The group he works for, 51 for 51, is focused on convincing lawmakers to throw the rule out so that statehood can pass with just 51 Democratic votes.

“There’s no point trying to convince people who vehemently oppose civil rights on a large level,” he said, speaking of Republicans.

“It’s not enough to espouse progressive values and then sit back powerlessly as though we don’t have the tools at our disposal to make these things happen. We have the authority.”

The most important thing Powell says activists like him can do is remind people that Washington, D.C., is more than a collection of national monuments and government buildings.

“It’s a city with a robust culture and history, and the people who live here deserve to be humanized,” he said. “They deserve to contribute to this democracy.”

–With files from the Associated Press